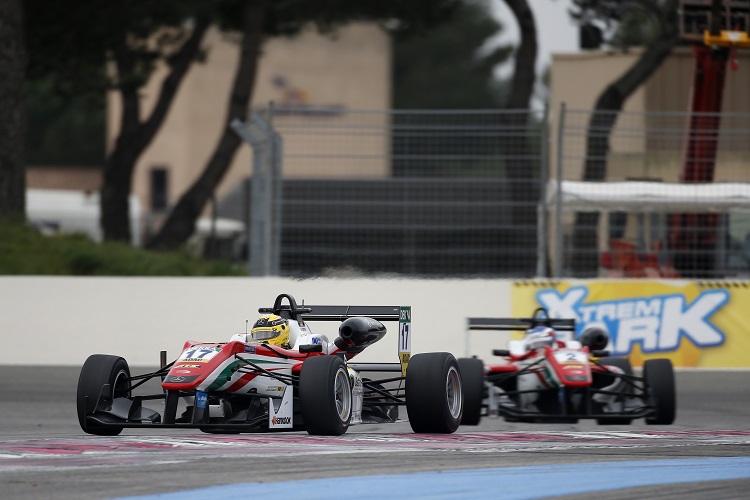 Günther withstood almost race long pressure from Cassidy, and survived a last corner attack from the New Zealander to secure the win by just 0.251s.

Joel Eriksson was the only driver to be able to stay with the Prema pairing, with the Motopark driver taking rookie honours with third place, finishing just 1.312s adrift of Günther having earlier made good passes on Ralf Aron and Mikkel Jensen.

Jensen was unable to remain in touch with the leading trio but was able to retain fourth for Mücke Motorsport, holding off race one winner Lance Stroll of Prema until the chequered flag, while Anthoine Hubert claimed sixth for Van Amersfoort Racing.

Hubert passed team-mate Harrison Newey for the position with just a handful of laps to go with the two appearing to touch heading into the penultimate corner, with Newey finding himself spinning out of points contention, ultimately finishing fourteenth.

Aron finished seventh for Prema ahead of fellow Italian F4 graduate Guanyu Zhou of Motopark, while Alessio Lorandi of Carlin and Nikita Mazepin of Hitech GP claimed the final points on offer in ninth and tenth respectively.

Hitech’s Ben Barnicoat just missed out on the points in eleventh ahead of Callum Ilott, who stalled his Van Amersfoort Racing machine at the start and did his best to make up ground.

George Russell had hoped to climb up from the back of the field but an early pit stop to replace his front wing left him well out of contention, ultimately finishing more than a minute down in eighteenth.