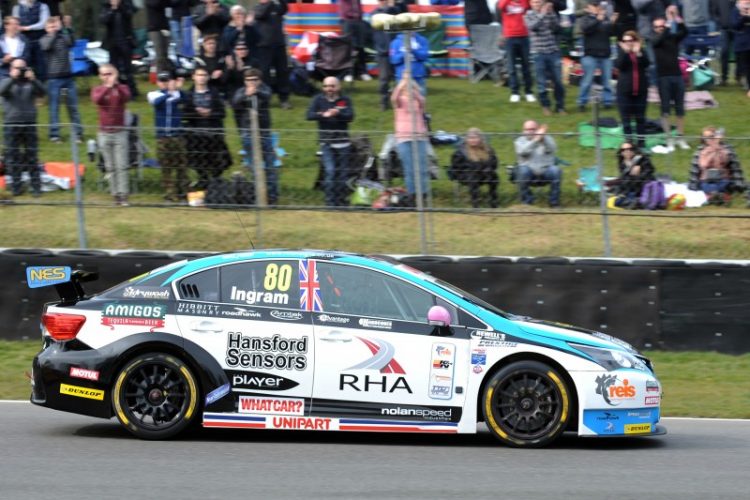 Tom Ingram admitted that “the heat may have gotten” to some of his Dunlop MSA British Touring Car Championship rivals in an incident-packed opening race of the day from Thruxton.

The Speedworks Motorsport driver missed out on becoming the second two-time race winner of the 2016 season in a chaotic opening race of the day, fighting back from several incidents to second having started from pole position.

The result moved Ingram within 22 points of the series lead, admitting afterwards that evading the late carnage was a crucial moment for the remainder of his weekend in Hampshire.

Speaking to The Checkered Flag afterwards, Ingram said: “There was a lot of stuff going on. Not really much time to breathe and incurred a lot of damage. Considering we’re all supposed to be looking after our tyres, everyone forgot to look after their cars and themselves.

The race was one littered with incident and bunching within the pack, Ingram adding: “I think the heat may have got to a few people today – it’s gone a bit mad!

“I don’t why there was so much going on. It didn’t need to be done. There was a lot of people getting caught up in things – myself included – on the first lap and then again halfway through the race. Quite a lot of damage for us.”

Ingram was involved in his fair share of contact during the shortened 12-lap race, starting with a collision between himself, Aiden Moffat and Matt Neal heading into the Complex for the first time. Another incident with race winner Adam Morgan at the same corner a lap later saw him eased into a slide of his own, Ingram recovering well to second spot by the flag.

Speaking of the first lap incident in race one, Ingram commented: “It’s the first lap. You can’t really read too much into it.

“Unfortunately when it’s like that you try to make up all the places that you can. It was never going to work with the both of us as Neal was on the inside of the corner. That meant I had to go wide and Aiden [Moffat] didn’t give me enough room. Unfortunately that cost himself some places as well. One of those things.

“I managed to get out of it and lived to fight another day. I didn’t really expect to be on the podium at the end of the race given what happened at the start. It puts us into a good position for the next race. Most of the crazy people are out of the way!”

The race was one plagued by punctures in the latter stages, Moffat and Neal among those that suffered from tyre failures. The latter’s played its part in the race-ending incident on lap 13, but Ingram says that ballast may have played its part also.

“Tyre wear wasn’t too bad for us because we weren’t carrying any ballast”, said the Speedworks Motorsport man on the coming second race. “The most noticeable one was when the safety car came out I had a big vibration on the front left. So I was really happy to see the end of the race.”