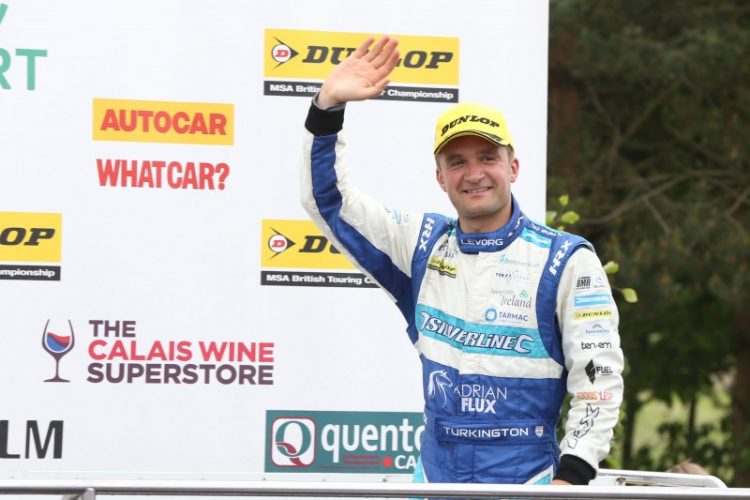 The double BTCC champion added a 12th win at Croft to his career tally in the opening race of the day at the North Yorkshire circuit, leading the first ever one-two result for Subaru.

A similar result in race two was denied by contact between himself and the sister Levorg of Jason Plato at Tower Bend on lap eight, but Turkington was satisfied with another strong display.

“On the whole, we scored good points and we look a serious threat now”, Turkington told The Checkered Flag. “We have to take positives from that”

Seventh place followed in a final race that saw Turkington briefly run third, the encounter set in much damper conditions which helped the team’s data gathering.

He added: “It’s the first time we’ve run the car in the wet. Definitely into the unknown there. It wasn’t easy, the car was quite lively but we sort of held our ground. The places that I lost at the last wasn’t a racing move – there was a big hit from the rear.

“The car was very strong at the beginning of the race. In those first three or four laps the car was alive, but then it dropped off. We can make improvements for the next wet race now.

“It’s good to get some good running in the wet. It gives us a good base to work on.”

BMR’s next test outing is expected to be at the two-day Dunlop tyre test during the summer break, before the next meeting of the season at Snetterton on 30/31 July.

Despite having scored 86 points in the previous two meetings alongside Plato’s 87, the Northern Irishman is not thinking about a potential championship challenge for the Japanese marque just yet.

“At the moment, no”, admitted a cautious Turkington. “We know that these were going to be our two strongest tracks – Oulton and Croft – so we’re still a long way back, but it depends on the break and the pace of the improvements.”