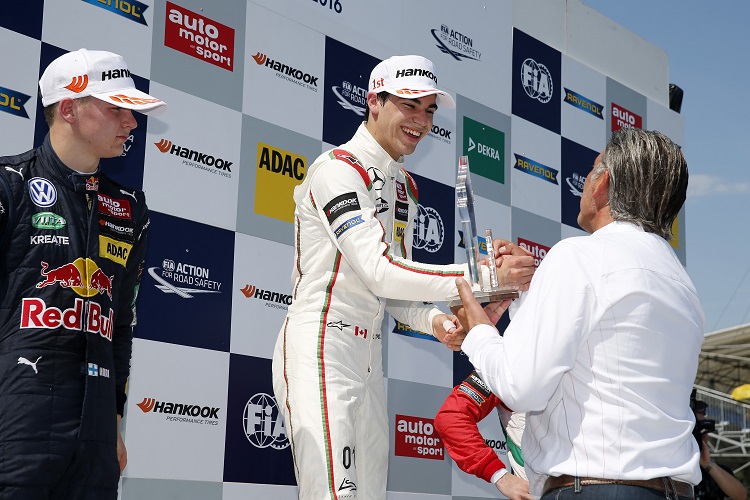 Lance Stroll continued his remarkable run of results in 2016 at the Norisring, taking two victories and a runners-up spot in the three races held there last weekend.

The Canadian has been the in-form driver in the FIA European Formula 3 Championship, and the Prema Powerteam driver has now finished inside the top two in the past seven races, and has a healthy 86-point lead at the top of the championship standings at the halfway point of the season.

“It’s been an excellent weekend – Prema did an awesome job over all three days,” revealed Stroll. “We collected valuable points in each race to increase my championship lead which was obviously the objective.

“It’s cool leading the series at the mid-point but it only matters who leads after the final race at Hockenheim in October.”

After taking pole for race one, and with Callum Ilott taking a grid penalty for an engine change after setting the fastest time, the battle for pole position for races two and three ultimately ended up in a straight fight between Stroll and Van Amersfoort Racing’s Anthoine Hubert.

The Frenchman denying the Canadian pole for race two due to setting his time first – their respective times were identical to the thousandth of a second. Stroll got revenge for race three however, albeit by the tiny margin of 0.020 seconds.

“Qualifying was also very good on Friday, Prema doing a great job for me with the car in extremely hot conditions,” said Stroll. “We were always in contention for good grid positions and ultimately secured three front starts.

“The times were ultra-close. I actually equalled Anthoine’s time who started from pole for race two but he did it first so took the No1 spot.”

Stroll took advantage of a mistake from Ilott that saw the Briton collide with then race leader Joel Eriksson to take victory in race one, before then following home Hubert in race two, while he led the stop-start race three from start to finish to move further clear in the championship standings over the chasing pack, who have been unable to replicate the consistency and maturity the Canadian is showing so far this year.

“The opening race was challenging,” said Stroll. “I made a good start but Joel caught and passed me – I wasn’t hooked up completely with my car – but my pace improved. Ilott took out Joel after a lunge coming from miles back behind me. I just kept my cool for the remainder of the race.

“In the second race, I got down the inside and alongside Anthoine after the start going in to the hairpin but the track on the inside was slippery and I was cautious not to lock-up the front tyres and create an accident. Anthoine went on to drive a mistake-free race.

“Sunday’s final race was run behind the Safety car mainly but I still needed to be alert and manage many things that were happening to ensure I made no mistakes.

“All in all, a good few days at the ‘office’ but we all need to remain totally focussed for the upcoming races.”