Podium Finisher Sutton: “MG Were Strong In The Right Places” 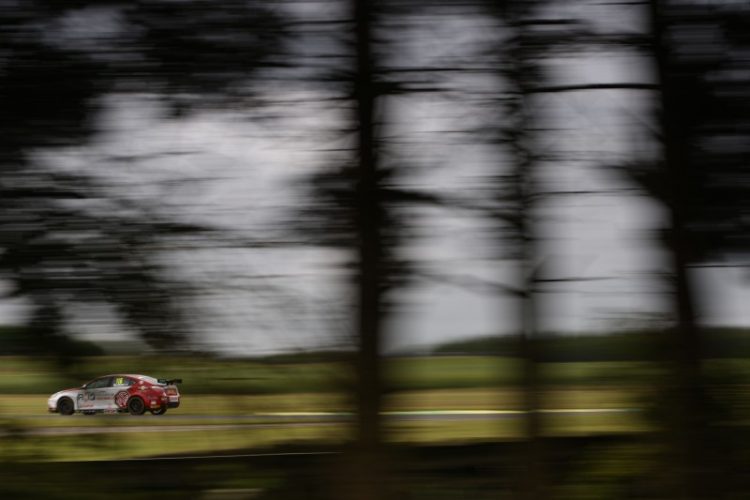 Ashley Sutton was “over the moon” to take his first ever Dunlop MSA British Touring Car Championship podium finish at Croft, admitting that a change in weather conditions would suit him later in the day.

The Triple Eight driver consolidated his third place on the grid in the opening 18-lap encounter at Croft, fending off the attack of West Surrey Racing‘s Jack Goff to grace the BTCC podium for the first time in his career.

Rookie Sutton said that a trio of safety car periods helped him more than he expected, adding that the MG6 GT was quicker than his BMW rival at the right places at the right time.

“I’m absolutely over the moon”, Sutton told The Checkered Flag afterwards. “We know the track is a RWD track, so to be the first FWD car over the line is great, but to be third as well is even better.

“We were strong in the right places. Obviously the safety cars didn’t help because they were just bunching us back up. But, in a way they didn’t as well because they looked after the tyres for us. It was a tough race but we managed to defend well against Goff and held our own in some of the others.

Sutton said the MG was quick enough in the faster sections to hold off the BMW 125i of Goff, adding: “We were quicker in sectors one and two. It was a case of managing Jack’s traction coming out of the chicane and out of the chicane – we were really strong there. The car was spot on and I can’t thank the team enough.”

Ahead of the second race of the day, Sutton says that additional success ballast and the new harder tyre compound may make it tough to achieve the same result.

“When we carry more ballast it’s going to be a bit harder. We’ve also got the harder tyre as well, but we’ll see what happens”, he added.

The weather in North Yorkshire also hints that showers could arrive later in the afternoon, an intervention Sutton says he would welcome.

“It’s forecast rain for later on today, so that’s going to throw a spanner into the works. I wouldn’t mind a bit of rain yeah, it would spice things up!”