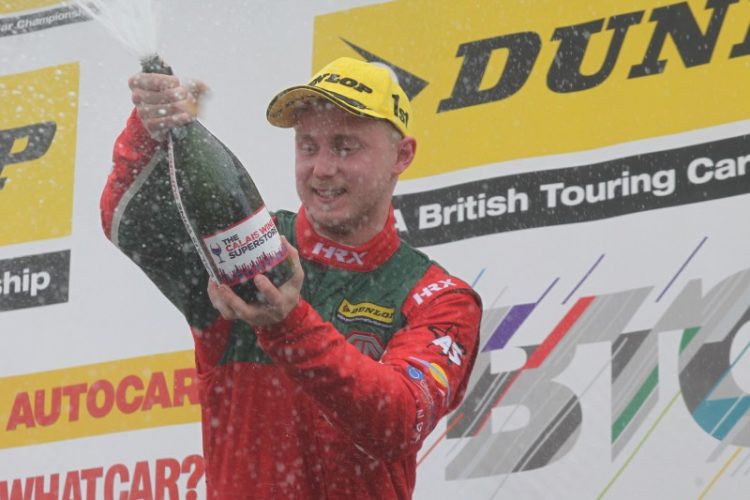 Under showers in the final encounter of Sunday’s action at the North Yorkshire circuit, reigning Renault UK Clio Cup champion Sutton grabbed the lead from Sam Tordoff on the penultimate lap to add a first win to his maiden BTCC podium visit earlier in the day.

The Triple Eight rookie became the 10th different winner in 15 races this season, admitting afterwards that the downpour gave him confidence he could achieve the feat.

“I thought I’d made my day with our first podium”, Sutton told The Checkered Flag after an emotional win.

“Then when I saw the rain coming, I was starting to do a bit of a rain dance in the garage. I know the car suits the rain and I love a bit of wet racing myself. I just had to piece it all together and go and do the job.”

A third safety car interruption late in the race gave Sutton concern in his charge to the front, admitting he had planned his overtaking spot which proved to be the entry to the Sunny In right hander on lap 17 of 18.

“At first I was panicking thinking ‘how many laps have we got left?’ and how long we’d been under safety car”, Sutton added. “As soon as I found out we had two laps I was like ‘right, game on’. Luckily Sam had a little bit of a lock-up into turn three, we were very quick too so I could make the move into Barcroft.

“I knew that, if I was going to make the move, it was always going to be at Sunny. If an opportunity arose somewhere else I would have done it there, but Barcroft is where we did it.”

Moving up to seventh in the championship, Sutton said that clinching the Jack Sears Trophy remains his overall season target rather than a serious overall title push.

“At the end of the day, we’re nowhere in the standings at the moment so we’re just taking it race-by-race at the moment, while keeping an eye on the Jack Sears Trophy.