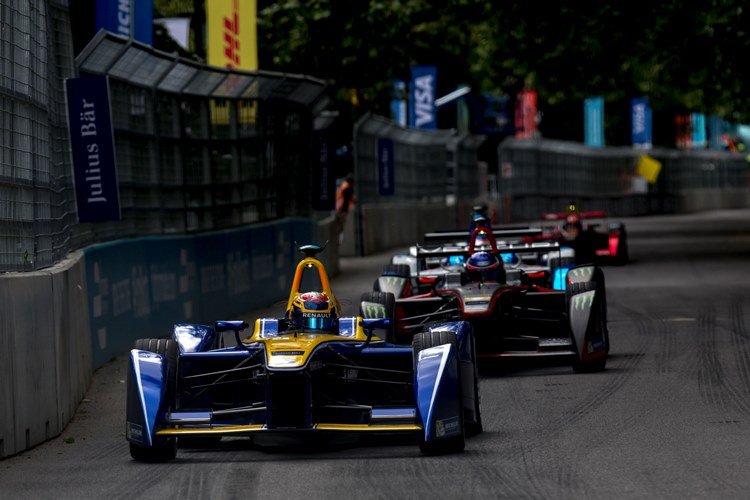 The two title challengers started level on points, with Buemi on pole and di Grassi starting in third. The race was set up for a tense battle but the wheel-to-wheel action was over after turn 3, when di Grassi ran into the back of Buemi’s Renault e.dams.

Buemi was helpless as di Grassi’s Abt Schaeffler Audi made little attempt to stop and smashed into the back of him. It caused rear wing damage for Buemi, and front suspension damage for di Grassi, but both were able to recover to the pits.

With both cars out of the runnign for points, the rest of the race then became a challenge for who could set the fastest lap, and with it score the two points that would take the title. If neither driver managed to get it, di Grassi would have won the championship on count-back due to having more third place positions.

It led to a bizarre finale where both of the championship contenders spent most of the time in the pits making set up changes, and waiting for a clear section of track.

Although di Grassi set an early effort of 1:27.0 to get fastest lap, it was clear it wouldn’t be good enough to last. Buemi came out of the pits to respond on lap 12, but his first attempts were ruined by a safety car period caused by Sam Bird stopping out on track, and then di Grassi driving slowly on the track in front of him.

It didn’t please the Swiss driver, and the frustration was showing when he called his Renault team amateurs for not giving him enough information about what he needed to do.

It took until lap 23 for Buemi to put in a decent effort, a 1:24.3 that looked like it would be good enough.

Di Grassi did everything he could though to wrest fastest lap off him, but even using FanBoost to give him a good run into a lap wasn’t enough. He eventually clocked a 1:24.4, just five thousands slower than Buemi, before admitting defeat and pulling into the pits.

Buemi for good measure put in an even faster effort on the second last lap to secure the fastest lap and with it the two points needed to beat di Grassi.

Di Grassi was called to see the race stewards immediately after the race, with a penalty of some sort expected, but regardless of the punishment it won’t have an effect on either championship.

Speaking after the race, Buemi said “It is difficult to realise, I wasn’t expecting to celebrate it that way. I’m more than happy. It was a tough season and to start the race with what he (di Grassi) did, I didn’t know what to think. Even for the fastest lap he was waiting for me not to do the fastest lap. In the end I think the best driver and the best team won.”

Speaking about the incident he commented, “It’s very simple, I stayed flat for a long time because I knew he would give it a go and try something crazy. He started to brake properly and then he really went for the accident.”

Di Grassi unsurprisingly had a different view, and after coming out of the race stewards office, he said, “It is clear from the data I just saw that Seb braked 50 metres too early. It was too late for me to control the car and I ran into him.”

“It is not really fair to have points for fastest lap, we are here racing, but that’s the rules. We did everything possible this year, and the impossible, and to lose the championship by just two points with a car that was far slower means that I’m proud of the team.”