Prost gets back to back wins at London ePrix 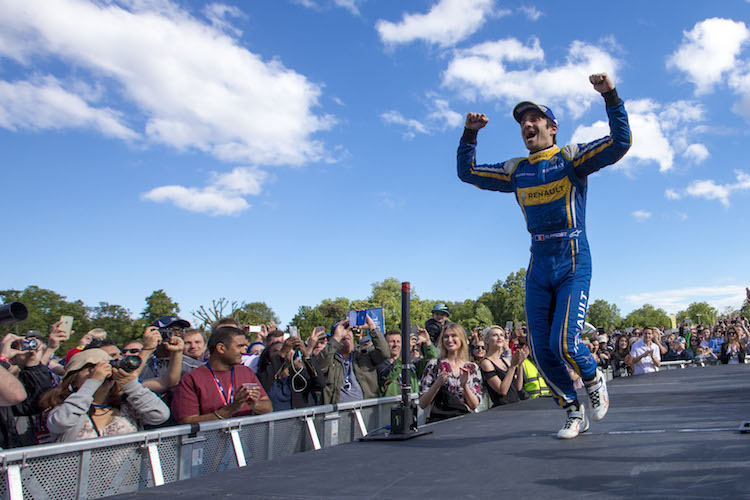 Nico Prost won back to back races at the London ePrix as title rivals Lucas di Grassi and Sebastien Buemi both crashed out on the opening lap of the second round at Battersea Park.

Di Grassi was attempting to close up on Buemi into turn three when he failed to stop, wiping Buemi out and causing damage to both cars. Although both were able to return to the pits for their second cars and fight over fastest lap, it took both of them out of contention for the race.

This left Prost in the lead, with Nick Heidfeld and Daniel Abt behind him, followed by the high-starting Oliver Turvey and the two DS Virgin Racing cars of Sam Bird and Jean-Eric Vergne.

Bird wasn’t to last long though as his car suffered a power loss, and despite several attempts to get it up and running again it was to no avail.

This brought out the first safety car of the race, and no sooner had it pitted it was brought out again as Robin Frijns had to retire after colliding with Jerome d’Ambrosio.

Ambrosio would laugh off the incident after the race, but he was lucky not to be given a black and orange flag for the rear wing damage he suffered, and it put Frijns out immediately with suspension damage.

After the restart Abt was crawling all over the back of Heidfeld and he eventually pulled off a superb move around the outside of the chicane, although he later thanked his fellow German for his “very fair driving” that avoided an incident.

The pit stops followed shortly after, and Heidfeld was to lose another place to Vergne who took fourth.

Turvey also lost out in the pit stops, but both his and his teammate’s race was ruined when their NextEV TCR cars both lost power. This plummeted them to the back of the order, but thanks to the number of retirements Nelson Piquet Jr would come home for a single point in tenth.

Ahead of them chaos reigned on the last lap as three drivers ended up receiving time penalties for going over their energy allowance.

Although he was in second, Vergne had only 2% energy left to complete the final lap – way under what was required. As such both Heidfeld and Antonio Felix da Costa behind him were told to use all of their remaining energy to catch up and pass him.

They managed to do this, but not without going over their energy limits as well just a couple of hundred yards before the finishing line. This promoted a surprised d’Ambrosio to third, with his Dragon Racing teammate Loic Duval, who had started last, finishing fourth.

Throughout the drama of this and the safety cars, Nico Prost was serenely driving into the distance. He had quickly built up an eight second gap to Daniel Abt, and then expertly managed it to preserve his energy.

It was an assured drive from a man who has been under pressure for not being able to match his faster teammate this year. He crossed the line to make it a perfect weekend in London with his fifty-point haul taking him up into third place in the championship, and helping secure Renault the team’s title.

Speaking about his win afterwards he said, “Again like last race the safety cars were the main challenge, but the car was quick so I was able to pull away each time, and from there it’s just remaining focussed and not making a mistake. The team gave me a fantastic car this weekend – they don’t get much better than this.”