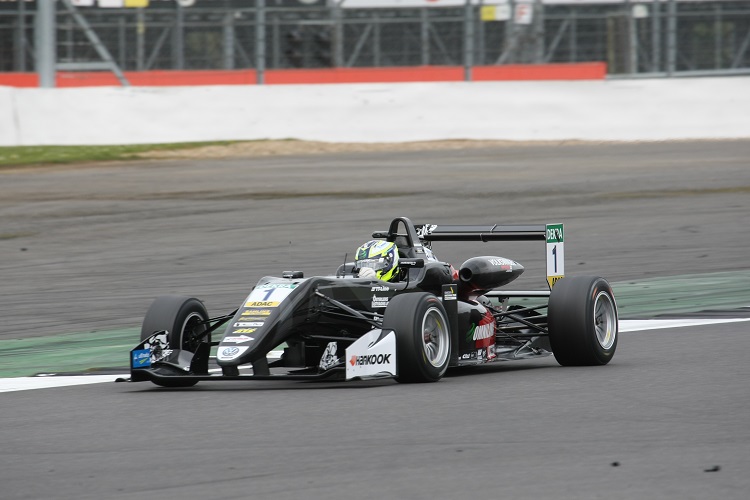 The Motopark driver started third on the grid but after a sluggish getaway from race one winner Lando Norris to move into second, then made a move around the outside of Brooklands on pole sitter Callum Ilott to take the lead.

Eriksson managed to get a gap to Ilott but the Prema Powerteam driver made a mid-race charge to close it down to around half a second, but the Briton could not get close enough to make a move for the lead, and ultimately fell back again, finishing 2.336 seconds down at the end of the nineteen lap race.

Jake Hughes was 15.397 seconds down on the race winner at the chequered flag but took the final spot on the podium for Hitech Grand Prix, getting the better of Maximilian Günther early on and then edging away from the German, who was forced to defend robustly from the challenge of Jake Dennis.

Mick Schumacher ran sixth for much of the afternoon and held off the challenge of the recovering Norris, but the Briton endured a horror final couple of laps as whilst attempting to make a move on Schumacher, found himself passed by the German’s team-mate Guan Yu Zhou on the exit of Copse, before his own team-mate Jehan Daruvala worked his way ahead on the run down to Stowe later in the lap.

The final result meant that Norris could only finish ninth, while his fellow Brit Harrison Newey claimed the final point on offer after another exciting run from seventeenth on the grid, with his final move coming on Van Amersfoort Racing team-mate Joey Mawson at Brooklands. Mawson had run as high as seventh before being passed by Norris, and with his momentum lost he found himself losing places to both Zhou and Daruvala before falling into the clutches of Newey.

Marino Sato showed just what he was made of with some great moves on both Ralf Aron and David Beckmann, the first around the outside heading into Maggotts and the second even better on the outside of Copse.

Despite this, the Japanese Motopark driver could only finish twelfth, just ahead of Carlin’s Ferdinand Habsburg who had found himself shuffled to the back of the pack at the start but fought back to finish thirteenth.

Unfortunately, both Aron and Beckmann, along with Pedro Piquet and Nikita Mazepin all suffered drive-through penalties for track limit offences, although all were out of contention for points by the time of their penalties. As well as the four drivers, almost every driver had warnings about track limits during the race.

Race three takes place on Sunday morning, with Ilott again on pole position ahead of Norris, who will be looking for a much better getaway tomorrow.