Timo Glock on Pole for DTM Race 2 in Hockenheim

Coming into the second qualifying session of the 2017 DTM Series, it was the BMW‘s and Audi‘s who were leading the way after it was Mercedes who spent much of the weekend on top.

In the third and final practice session of the weekend, the drivers initially struggled to get heat into their tyres following the banning of tyre blankets as well as chilly ambient temperatures which resulted in a few off track excursions and wild drifts by some.

Maxime Martin led the way in the session early on – the Belgian will be hoping for a more positive day in the car after a disappointing race yesterday where he ended up out of the points after starting fifth on the grid.

Nico Muller and Jamie Green took over at the top spot of the timing but Matin fought back to regain the benchmark time.

After the 30 minute session BMW and Audi were the ones to beat with Gary Paffett the lead Mercedes down in eleventh place a second adrift of the BMW of Martin.

Yesterday’s race winner Lucas Auer was only able to put his Mercedes 15th fastest at the end of the session.

Rene Rast will start on the front row of the grid alongside Timo Glock, in his first weekend as a fully fledged DTM driver. Credit: ACPhotocorse

Damp and drizzly conditions greeted the drivers as they set about qualifying for the second qualifying of the season.

Timo Glock was the first driver to brave dry tyres at the halfway point of the session, where he ultimately went on to claim pole position with a 1m31.406s in the final minute to claim only his second pole in the series.

All cars started the 20 minute session on wet tyres with Edoardo Mortara leading the times early on.

The German slowly fell down the order from there as more and more drivers took to the dry tyres. Glock soared back to the top of the timing screens on his final flying and managed to remain there despite a flurry of fastest laps behind him – meaning he claimed the additional three points for pole.

In only his second start as a full time DTM driver Rene Rast was one of those drivers to improve meaning he will start alongside the German on the frontrow of the grid. 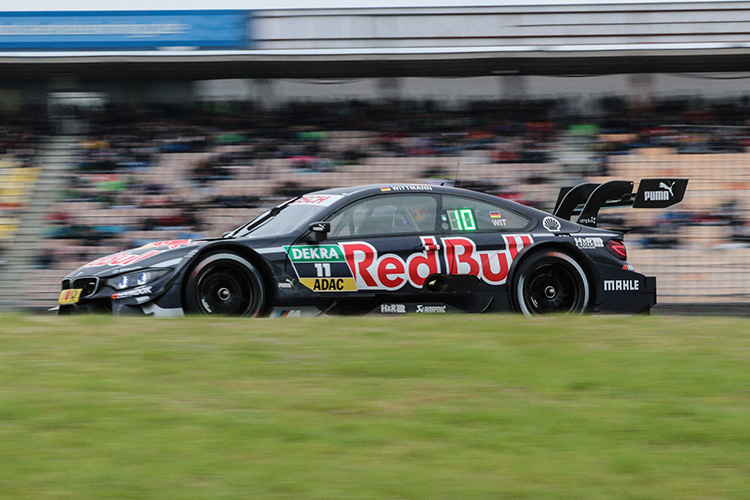 Champion Marco Wittmann has a lot to do from 17th on the grid. Credit: ACPhotocorse

Reigning world champion Marco Wittmann could only go as well as 17th place and has a lot of work to do from there. BMW team-mate Augusto Farfus had recorded the second-fastest time on his final flying lap, but had his time deleted for crossing the finish line too late and therefore has to start in last.