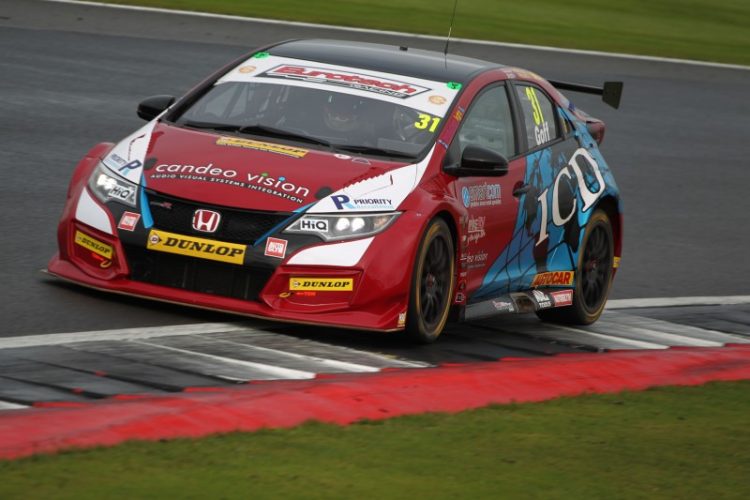 Jack Goff eased to a comfortable win in the second BTCC race at Silverstone, passing polesitter Tom Ingram early on in proceedings.

Race one polesitter Goff took advantage of a softer tyre compound than Ingram to spend the opening three laps probing and prying for a way past, eventually forcing the door open on the inside of Brooklands after Ingram had run wide exiting Copse.

This left Ingram to go defensive later in the race, holding Colin Turkington at bay and backing the BMW into his championship rival Ashley Sutton in the closing laps.

Sutton had initially lost ground off the start, but picked his way past Adam Morgan and took advantage of a driveshaft failure for the fast starting Aiden Moffat.

On the final lap, Sutton moved to the right of Turkington approaching Brooklands, slinging his Subaru around the outside and taking the inside line for Luffield, barging his way past into the final podium position.

Rob Austin rounded out the top five after a robust battle for position with Morgan. His attempt to follow Sutton through around the two-thirds mark was defended aggressively, sending him onto the grass.

Morgan clung on until the final lap, being demoted to sixth as Austin used a run out of Copse to dive past Morgan through Becketts.

Gordon Shedden was able to cope with a straight-line speed deficit to finish seventh, passing Dave Newsham near the end. Newsham lost one more place before the end, capitulating eighth to Rob Huff, who was able to hit his stride in the second race. Huff had taken advantage of a mistake by Mike Epps – locking up into Becketts – to take ninth place the lap before passing Newsham.

Ant Whorton-Eales had started the race in sixth, but suffered a scary incident late in the race, spinning at high speed at the entrance to Brooklands. The Audi driver was lucky to avoid collecting any of his rivals, though the resulting time loss sent him out of the points altogether.