This weekend will see the 2017 Porsche Carrera Cup Australia championship go down to the wire on the Gold Coast, in the final race weekend of the season with the title still very much up for grabs.

Championship leader David Wall takes an advantage of 62 points over his nearest rival Andre Heimgartner, with Alex Davison a further 30 points back in third place.

With a total of 180 points still available for the three races, the title could go to any one of the trio, all representing different teams, and all finishing on the podium at Mount Panorama last week.

“I’m feeling good and I think it’s a testament to everyone at Wall Racing that we’re in the hunt,” said Wall.

“I’m very chuffed to be there. Everyone has put in the hard yards since a strong showing at the end of last year and I’m proud of that and looking forward to getting stuck into it.

“We’ve put everything we can into making the car as good as possible and I’m ready personally, too.”

The Sydney-based driver added that he has enjoyed the level of competition in the championship this year.

“There’s plenty of competition both with the guys I’m battling for the title, and outside of that as well,” he explained.

“Andre has lots of experience even though he’s a young guy and is obviously very good at what he does. I’ve also raced Alex for years and he is world renowned as a Porsche driver – and a driver in general.

“I’m looking forward to the challenge.” 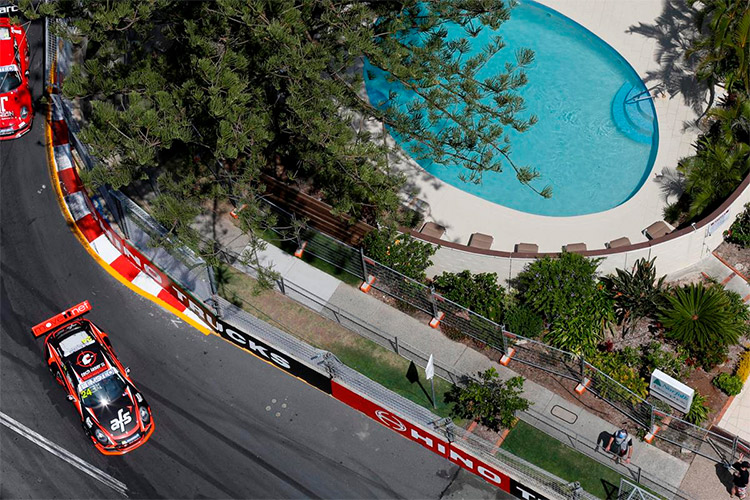 Heimgartner was an early leader in the championship after storming the opening round in Adelaide earlier this year; he will be hoping to use his street circuit expertise to full advantage on the challenging circuit.

“After leading the championship early and now chasing David Wall, this title has been something I have been working towards all year long and with the final round hitting the track this weekend, I am going to be throwing everything I can at it,” said Heimgartner.

It’s an impressive feat that Heimgartner is in the running for the championship  as he once again doubles up for driving duties in both the Carrera Cup and the Supercars Championship.

“After the results at Bathurst, I am feeling confident of a strong result this weekend, but as we know, anything can happen on the streets of the Gold Coast!”

Alex Davidson has managed to turn his season around after a bad start, finishing on the podium 11 out of the last 12 races. The 2004 Carrera Cup Australia champion is also in the hunt for the inaugural Carrera Cup Australia Endurance Cup title, which he currently tops ahead of Heimgartner and Wall. The second race of the weekend will see the deciding factor in the Enduro Cup title.

The final race of the season also sees the last time the first-generation 911 GT3 Cup car will be out in the series as it switches to the newer version that has already had success in America and Europe.

Brenton Grove returns to the Porsche Centre Melbourne car this weekend after a successful debut at Sandown as veteran driver Garth Walden takes his first Carrera Cup start of the season.

Although the TAG Heuer Carrera Challenge has already been wrapped up by Stephen Grove, there is still a strong challenge for third place.

Following a DNF at the Bathurst Enduro race Grove is only fourth in the Enduro Cup standings, currently led by Tim Mile’s, who has been forced to miss the final round of the season due to business commitments, meaning the championship is up for grabs.

Marc Cini, Porsche Carrera Cup Australia’s most experienced driver is second in the standings with Graham Williams in third place, both could take the title this weekend.