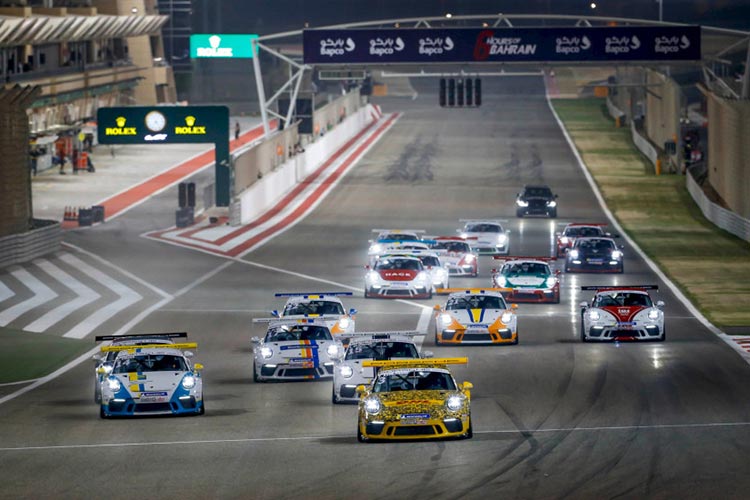 Marking the first race of the new generation GT3 Cup car in the region, Ashkanani led the race from start to finish, and while it was a dominant performance, the 2015 Ginetta GT4 Supercup champion Tom Oliphant pushed Ashkanani until the chequered flag.

“It was the perfect return to the championship for me;” said Ashkanani. “Qualifying in pole position and a strong start allowed me to create a good gap early on. There was a battle going on behind me for second place, so I used this to extend the lead further.

“Once out in front I knew that I had to concentrate on making no mistakes and getting the car across the line. Tom Oliphant managed to close the gap and put me under a bit of pressure towards the end, but I managed to keep my cool and finish with the win.”

Oliphant was left to rue what could have been after losing out at the start when wheel spin off of the grid forced him to lose position in to the first turn.

“We had mega pace and I made a small mistake which cost me nearly a second so I couldn’t challenge, I think we could have won it but wasn’t to be.” said a thoughtful Oliphant following the race.

Looking ahead to the second race Oliphant was confident he could challenge for the victory, having recorded the fastest lap time of the race and finsihing just 0.709 seconds behind Ashkanani.

“Ashkanani, did a great job in qualifying and race 1 but I’ve had the pace over him in all sessions, mistakes from me have cost me today but I feel with a good start tomorrow I can challenge for the win” he added.

In the Silver class it was a Swedish one-two led across the finish line by Magnus Oehman, with MTech Competition team-mate Christoffer Bergstrom in second place.

Isa S. Al Khalifa was happy with the progress he is making in the championship, despite not getting away from the grid very well.

“It wasn’t the best start in my opinion, but I ended the race well.” said the Team Bahrain driver. “I secured a podium place in my first race in the silver category, which is encouraging for me.

“It is a great feeling to see your progress and where you have moved through the different stages of the championship over the season. I want to end 2017/18 closer to the top overall, so I will keep striding towards that goal.”

British driver Mark Radcliffe finshed the race in thirteenth overall, and fifth in the silver class following a number of battles throughout the race.