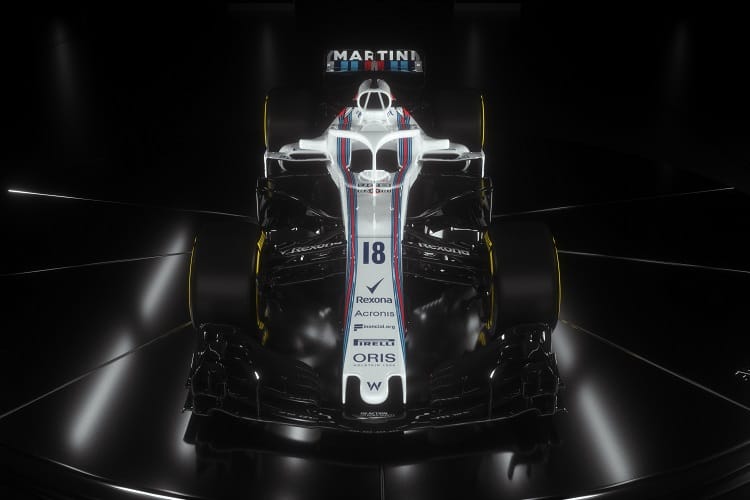 Paddy Lowe says Williams Martini Racing’s 2018 challenger, the FW41, has gone beyond evolution, with some of the updates a revolution compared to its 2017 predecessor.

The team unveiled their new Mercedes-Benz-powered car in a London launch on Thursday, with the car looking vastly different to the FW40 that took the team to fifth place in the Constructors’ Championship, thanks to the input from Chief Technical Officer Lowe and from Head of Aerodynamics Dirk de Beer, both who joined ahead of the 2017 season but had limited input in the design of last years car.

Lance Stroll and rookie Sergey Sirotkin will race the car, which features the Halo head protection system for the first time, with Robert Kubica acting as the Reserve and Development Driver.

“It is very exciting to be giving everyone the first look at the FW41,” said Lowe. “It is the product of some great teamwork across the various functions in the organisation including aerodynamics design, vehicle dynamics, race engineering and systems engineering.

“The car has many new features, most of which are not all that obvious, but externally the team has pursued a very different aerodynamic concept which has allowed us some significant progress in aerodynamic performance.

“All Formula 1 cars are an evolution of what has gone before to some extent, but the FW41 does involve a number of departures from the directions that have been pursued in the past. Overall, the philosophy we are starting to see emerge is a new approach to the collaboration between aerodynamics and design to achieve the optimum working result.

“Aerodynamics, structure and weight are the three major trades to be made in designing a Formula One car, and all the work, alongside a number of radical changes to the car’s packaging to incorporate further developments from Mercedes HPP, have led us to the FW41 being revealed today.”

Lowe hopes the new car will help the team progress, particularly compared to their performances in 2017, where, aside from Stroll’s relatively lucky podium in Azerbaijan, their best results were a trio of sixth place finishes in Australia, Bahrain and Mexico.

“We hope that this car will make progress in the performance rankings relative to 2017,” said Lowe. “The whole technical team is also feeling very positive about our two talented young race drivers with the combination of Lance and Sergey, alongside the contribution of Robert as our reserve and development driver.”