What did we learn? A week ago that was little more than a flippant question, greeted with similarly facetious remarks about the absurdity of testing in Europe or the abject visual horror of the halo. This week’s bumper batch of mileage has gone a long way towards restoring the reputation of F1’s winter testing base, and a test unencumbered by any deluges of Siberian snow has at last given the paddock a meaningful read on the competitive order in 2018.

However, even with such extensive running, the pecking order during testing can be infamously tricky to assess. All too often the timing pages can paint a very different picture than the ever rampant paddock rumour mill. So whilst Scuderia Ferrari topped the times on three of the four days (with Sebastian Vettel smashing the existing unofficial lap record by 1.2s on Thursday), it will not be the scarlet juggernaut who will top the form guides heading to Melbourne…

Bottom of the speed traps, top of the pecking order…

Mercedes AMG Petronas Motorsport is not a team prone to preseason showboating. They couldn’t help themselves in 2015 when Nico Rosberg accidentally lapped 1.2 seconds quicker than anyone else, but all too often the team prefers to log long runs on harder tyres, turn the engine down and remain inconspicuous. But there was nothing inconspicuous about the reigning champions’ sledgehammer showcase in the final Barcelona test. The team might have preferred to prop-up the order in the speed traps, but these were a pair of sandbags that even Mercedes couldn’t disguise.

Lewis Hamilton and Valtteri Bottas produced a vast array of utterly stellar long runs, which not only contributed to a truly eye-watering mileage tally (having racked-up some 3,000 miles across both tests) but looked the makings of a car far more comfortable in race trim than its predecessor. Mercedes might not be as dominant as some claim – in qualifying trim certainly – but it would come as a shock if the Brackley-based squad aren’t the clear frontrunners in Melbourne.

It’s a familiar pattern: the Scuderia shines on the timing screens in preseason testing, looks less convincing in finer analysis and spend the opening races virulently disappointing the Tifosi. 2011 was perhaps its most flagrant offence after promising a title charge on the back of a pair of stellar test outings, only to deliver just a single victory during the season. Last season was a happy exception to the rule, with Ferrari making good on its testing promises right out of the gates in Melbourne.

In 2018, however, the paddock is rather more pessimistic about Maranello’s early season chances. Certainly, Ferrari has not maintained the advantage they often enjoyed in race pace over Mercedes in 2017 and looking at the champion team’s lowly standing in the speed traps, there is no reason to believe that the W09 couldn’t also surpass the Scuderia’s record-setting hypersoft laps. Last year’s SF70H was widely believed to produce the most downforce of any car on the 2017 grid: has a departure towards a more radical high-rake concept already put Ferrari’s title hopes in jeopardy?

The tale of two Renault customers…

The McLaren blame game that started in the darker recesses of the sporting columns last week was a brief plane journey wide of the mark. Far from exonerating Honda and implicating Woking as the culprit behind the team’s three years of woe, the unreliability the McLaren F1 Team suffered in the second Barcelona test looked little more than the inevitable teething troubles at the start of an ambitious new partnership. Indeed, the fact that McLaren has seemingly chosen not to compromise its chassis design is arguably a good thing, and Fernando Alonso‘s sub-1m18s effort in the dying stages of Friday was a flicker of that potential. McLaren and Renault might not be able to hit the ground running in Melbourne, but there is headroom for some impressive development over the season.

A team that is perhaps not on such a promising trajectory is Aston Martin Red Bull Racing. The RB14 caused a stir in the first test with a chassis that looked to be the class of the field, but its superiority in the corners looked to evaporate as the second test slowly unveiled Mercedes’ true hand. Certainly, the Red Bull chassis does not have enough of a margin over the Mercedes to counteract a rumoured 40-50bhp deficit. Whilst Milton Keynes might be ahead of Maranello in Melbourne, it would be a shock if Red Bull could produce anything that would create tension in Brackley. Expect wider political consequences if Red Bull again fails to capitalize on the aerodynamic formula they lobbied the sport to adopt… 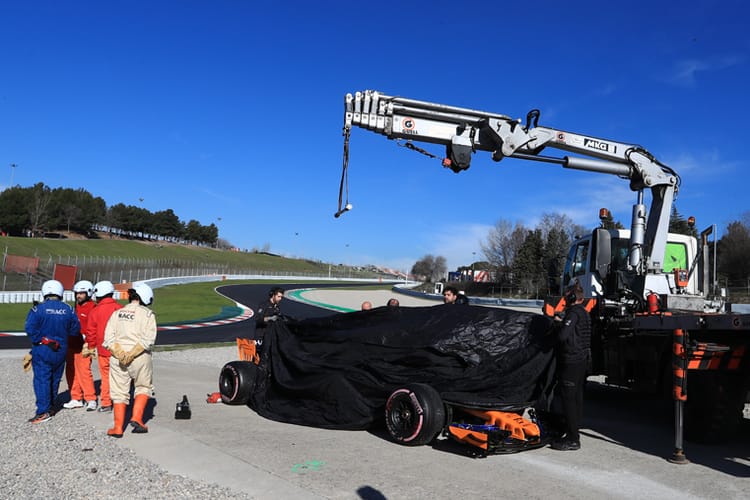 …and don’t expect the political backdrop in 2018 to be confined to Red Bull’s hypothetical frustrations. Power unit politics are not exactly three words that quicken the pulse of your average sports fan, but the machinations behind F1’s ongoing game of engine musical chairs promises to be just as significant a tale in 2018 as they were in 2017. The war of words has already begun: Stoffel Vandoorne claimed that McLaren already has a closer relationship with Renault than it ever had with Honda, and Red Bull motorsport boss Helmut Marko accosted Toro Rosso’s James Key live on air over overtures he made about the possibility of Milton Keynes switching to Honda power. As Franz Tost‘s Brazilian outburst confirmed last year, strong personalities tend not to coexist well with uncompetitive/unreliable engines.

The Haas F1 Team may have topped the speed traps in the first test, but they headlined little else besides. The car looked thoroughly ungainly on-track, and together with the Alfa Romeo Sauber F1 Team, looked the outfit most under pressure to makes gains going into the final test. A week and some setup refinements later, and Haas’ 2018 outlook appears transformed from backmarker peril to a midfield dark horse. Perhaps most striking was Kevin Magnussen‘s super-soft benchmark; just a quarter of a second shy of Carlos Sainz Jr‘s best on hypersofts. Indeed, across both long and short runs, the Dane proved an unexpectedly potent force in the second test.

However, Haas’ rejuvenation looks set to fall short of loosening the Renault Sport Formula One Team‘s firm grip on the midfield honours. The Anglo-French squad has looked strong on pace and reliability (but for gearbox gremlins on the final day), and whilst a Melbourne upgrade package could see the ever tenacious Sahara Force India F1 Team reenter the fray with Renault, the Silverstone-based outfit is more likely to form a tight three-way battle pack with Haas and a thrilled Red Bull Toro Rosso Honda team. Honda’s apparent 2018 renaissance has truly been the pleasant surprise of this year’s preseason testing programme.

Whilst Williams Martini Racing provided all the off-season entertainment, its break from the limelight in Barcelona was perhaps a little too inconspicuous. The team’s failure to do a qualifying simulation at least partially explains the team’s tendency to gravitate towards the foot of the times, but the squad would surely be hard-pressed not to be rather disappointed by the past two weeks of running. The nose of the FW41 would tend to wash out in the circuit’s many long corners, and in the slow-speed final sector, the rear axle looked more than a little ungainly. When the car did show a flash of speed it tended to be in the hands of rookie Sergey Sirotkin, who benefitted Robert Kubica‘s gracious decision to forfeit his Friday morning outing.

And yet, Williams handling woes were no match for Sauber’s unmatched levels of waywardness, with the week’s predominately green flag running punctuated only by the C37‘s magnetic attraction to the gravel traps. Neither Marcus Ericsson nor hotly-tipped rookie Charles Leclerc could restrain the Sauber’s innate urge to throw itself at the neighbouring scenery, causing three red flags in four days. This comes a disappointment to those who linked the team with an upturn in form on the back of its new Alfa Romeo financial deal and a number of bold new aerodynamic concepts. Unfortunately, on current form, the team are unlikely to be on anything other than backmarker pace come Melbourne.

"The timing of the safety car was unfortunate" - Williams' Dave Robson

"In the right place at the right time" - George Russell

By Nick Golding
2 Mins read
George Russell secured another points finish at the Italian Grand Prix after capitalising on safety car for Lewis Hamilton and Max Verstappen’s crash to finish ninth. Nicholas Latifi just missed out on the points in eleventh.
Formula 1

By Nick Golding
1 Mins read
Alpine Team Principal Marcin Budkowski is glad both Alonso and Ocon got through the Italian Grand Prix unscathed as the team record double points finish at Monza.