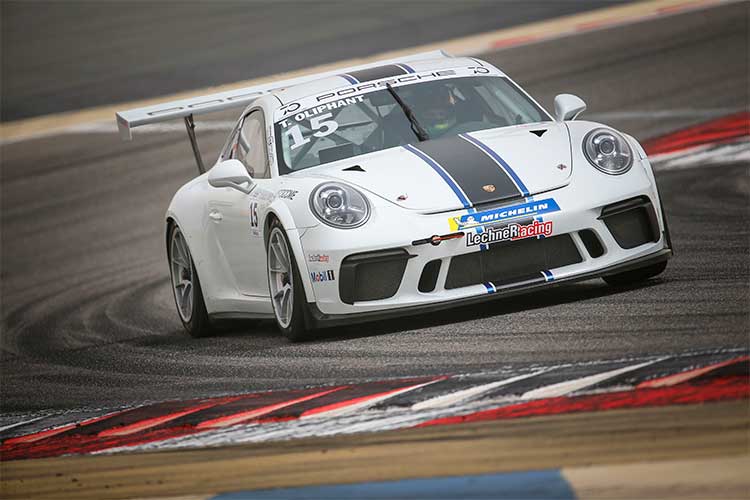 Heading in to the penultimate race weekend of the Porsche GT3 Cup Challenge Middle East, Tom Oliphant was sitting comfortably at the top of the points table, but an unfortunate racing incident saw him taken out of race, and ultimately out of the championship.

The weekend had started well for the British driver, setting the fastest times in pre-race testing and free practice on the Friday morning.

He would narrowly miss out on pole position by just 0.058 seconds, his fastest time placed him third on the grid.

The first race of the weekend saw Oliphant challenging title rival Al Faisal Al Zubair, and in the opening stage the Brit seemed to have the upper hand as he pressured the Omani.

As the competitors started their third lap Oliphant got a strong run in to the first corner, diving down the inside, unfortunately for the Brit, Al Zubair turned in sharply, the result saw the two cars collide, with heavy contact on the left rear wheel of Oliphant’s car.

Suspension damage caused from the accident would see Oliphant retire from the race and ultimately end his championship run for 2018.

Al Zubair would receive a five place grid penalty for his part in the incident, but with Oliphant unable to take part in the final race weekend of the year due to BTCC commitments, the title race was over.

A second place finish in the second race was some consolidation for the weekend, but Oliphant was left thinking what could have been.

“I’m gutted to have come away from the weekend with anything other than the championship title,” said Oliphant. “Having led the way right from the opening meeting, I feel like I deserved the right to fight for the honours on my last day of racing out here, but that opportunity was taken away from me.

“I’m confident that I would go and claim title success in the final rounds, however due to my BTCC commitments this won’t be possible. Sometimes the situation is out of your control and sadly on Friday this was the case for me. I have given it everything and just came up short.

“My time in Porsche’s has come to an end and I want to thank Redline Racing and Lechner Racing for running me in the championship’s and always giving me a great car, a large part of which was due to my mechanic Alex and engineer Frank, who have been there for every race.

“Also, thank you to my sponsors; Philips Automotive Lighting UK, Horizon Specialities and Next Level Motorsport for making it all possible. Now, it’s time to move on and focus on the new challenge of touring cars and I can’t wait!”

With focus now switching to his upcoming BTCC campaign, the Brit’s Porsche GT3 Cup Challenge Middle East career comes to an end with four wins and a final total of fifteen podium results in twenty races across two campaigns.