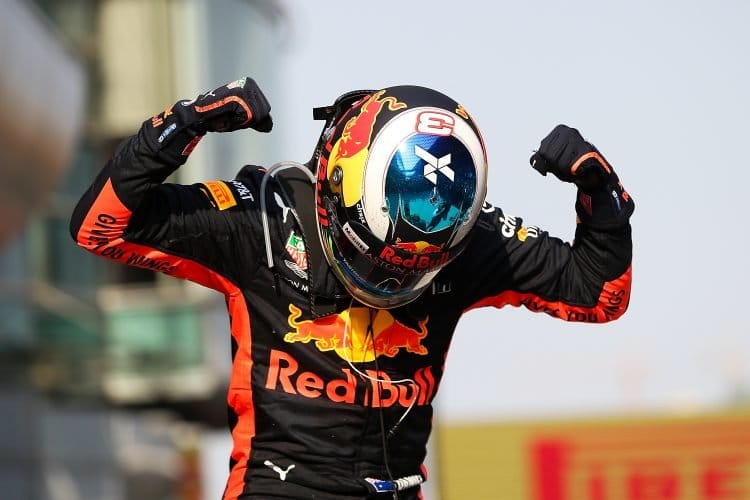 Formula 1 was overdue a thriller. There have been some exciting moments in recent races, in Bahrain especially, but fans have still waited patiently for the kind of race that will feature in historic montages in the future. Across a 20 lap, six-way duel arguably the sport’s finest wheel-to-wheel racer produced a showcase of overtaking excellence, and in turn, put manners on some of the finest drivers in the world. And as his helmet indicated, he didn’t apologize…

Top of the class…

It’s almost a shame that Ricciardo removed his right boot on the podium in Shanghai because it was his left foot that deserved the adulation. The Australian’s trademarked out-braking heroics have been a postcard image of F1 for the past four years. However, never before has Ricciardo’s remarkable feel for the brake pedal been so spectacularly showcased. He went into the race behind the curve. Another Renault power unit failure left Ricciardo with just a single tentative lap to qualify through to Q1, and having missed out on his qualy sim in FP3, it was almost inevitable that Max Verstappen would outqualify him yet again.

The opening salvos of the race were similarly unspectacular for Ricciardo. However a mid-race safety car and a fresh set of soft compound tyres put the scent of blood in the water, and F1’s newly dubbed “racing burglar” duly proceeded to mug five of the finest racers in the world. Daniel restarted the race in sixth; ten laps and five overtakes later he was in the lead. Whilst his fresher tyres gave the Aussie the tools to fight for the win, Verstappen’s various spills prove that they weren’t a free pass to victory. In a race where his left foot earned him yet more silverware, you can be sure that the wider significance of Ricciardo’s final pass on Valtteri Bottas wasn’t lost on the Aussie or the paddock.

The quiet man of F1 enjoyed a quietly stellar weekend in China. With Lewis Hamilton‘s whitewash Friday derailed by balance issues on Saturday morning, Bottas keenly took up the Englishman’s baton, capably heading Mercedes’ charge for the remainder of the weekend. He was the closest match for the supreme Ferraris in qualifying, albeit half a second back.

There was little more the Finn could have done in the race. He split the Ferraris into T2 on the first lap, and whilst he didn’t appear to have an answer for Sebastian Vettel in the opening stint, a stellar out-lap on fresh tyres saw gave Bottas crucial track position over Vettel. The Scuderia’s desperate attempt at using Kimi Raikkonen as a roadblock clearly didn’t foresee Valtteri deploying such a decisive pass on his compatriot. A cocktail of strategic error and Australian audaciousness would ultimately deny Bottas the win. It is ironic that whilst he can take solace in his best weekend of 2018 thus far, Bottas will be doubtlessly deflated about a race that so brilliantly showcased the talents of one the leading rivals for his seat.

Hulkenberg has arguably been one of F1’s most solid performers in 2018. But for Pierre Gasly‘s Bahrain breakthrough, the German has typically been the class of F1’s second tier. In China, for the sixth consecutive race, Hulkenberg qualified seventh, three tenths ahead of his team-mate (although equally failed to improve on his benchmark from Q2 for the second race in succession). In the early stages of the race, he was under pressure from a soft tyre-shod Kevin Magnussen, who was unusually gleeful about his failure to get through to Q3.

The safety car was a help to two-stoppers like Nico, however, the man himself unsurprisingly thinks he would have “come out on top” regardless. The frazzled tyres on the victimized Ferrari of Sebastian Vettel was a nice freebie that Hulkenberg decisively seized upon. Overall the German is continuing in the formidable vane he enjoyed last year and showing little sign of being deposed by his hotshot young team-mate.

Perhaps never have the words ‘hero to zero‘ been more appropriate. A week on from his heroics in Bahrain Gasly suffered a nightmare weekend in Shanghai with a slow car leading to the worst possible expression of frustration. It was clear as early as Friday afternoon that Bahrain had been a flash in the pan; the STR13 was clearly not gelling with the cold and blustery Chinese circuit. The Frenchman clearly wasn‘t gelling with circuit either, qualifying in 17th behind team-mate Brendon Hartley (a man who has in turn typically struggled in qualifying).

The circumstances surrounding Gasly’s cardinal sin are intriguing. Despite being on the slower medium tyres he was faster than his soft tyre-shod team-mate and duly set to be released by the team: a moment of dimwittedness or impatience clearly saw a gap that wasn’t there. Overall, Toro Rosso suffered from the inexperience of its drivers in China, and Gasly demonstrated why he continues to suffer such an ambivalent reputation.

The first three races of 2018 have arguably been among the poorest showings of Max’s 63-race career. However whilst his race-ending contact with Hamilton in Bahrain could be put down as a racing incident, his bungled pair of passes on Hamilton and Vettel in Shanghai were nothing less than poor racing judgement. Whilst team-mate Ricciardo didn’t exactly shy away from aggressive moves, Max’s clumsy collision with Vettel proves that racing aggression needs to be tempered with an acknowledgement of the risks. This tricky calculus is something Verstappen needs to master before he can launch a title bid.

There is perhaps a justified taboo over criticising Verstappen. For a brief while, any critique of his style was a thinly-veiled stab at his youthful promotion to the sport, often by drivers at the other end of the spectrum. However as Max has incontrovertibly proved his belonging within F1, his reputation has also become varnished by those weary of deprecating his refreshingly brash style. And yet, his Vettel incident was a collision that Max cannot exonerate himself from; and commendably, he had no qualms about apologizing immediately after the race.

Having been cowed by Marcus Ericsson‘s superb point-scoring weekend in Bahrain, Leclerc desperately needed a stronger weekend in Shanghai. Things started well. Despite his team-mate having the benefit of four weekends-worth of circuit experience, it was Chinese newbie Leclerc who qualified ahead; besting Ericsson for the first time in qualifying in 2018.

A clumsy spin in the first run, however, bore the hallmarks of a man struggling to control his machinery. That warning would come to bear in the race as another spin lost him the positions he gained from Hartley, Gasly and Ericsson. The Monegasque would limp over the line with floor damage, under renewed pressure to start a cleaner run of form befitting of his lofty repute.

Scuderia Ferrari was the fastest team in Shanghai, and in that vane, there was something reminiscent of the Hamilton-Rosberg dynamic, as Sebastian Vettel and Kimi Raikkonen pushed each other to new limits across practice and qualifying. The dominant Ferrari duo produced a pair of near-perfect laps in Q3, with a distant slipstream from the Force India of Sergio Perez just enough to help Vettel onto pole. Whilst strategic carambolage ensured in the race; robbing Vettel of track position and tragically using Raikkonen as a roadblock; neither driver appeared to have the pace advantage they enjoyed in qualifying. For the sake of Vettel’s title hopes, the German will be glad that Hamilton suffered a thoroughly anonymous weekend. It is indicative of the binary nature of the champion’s acrobatic driving style that he looked in commanding form on Friday, and unlikely to land any kind of competitive blow thereafter.

The McLaren F1 Team was not competitive in Shanghai, but that didn’t stop Fernando Alonso from scoring another hatful of points via a doubtlessly invigorating pass on his former German nemesis. Stoffel Vandoorne trailed home out of the points having been unable to match the Spaniard all weekend, whilst Carlos Sainz Jr suffered a similarly bruising defeat to his team-mate, finishing in ninth on the gearbox of the hobbling Vettel. The hopes of Haas F1 Team‘s one-stopping duo were dealt a blow by the safety car, however, Kevin Magnussen did a better job of hanging on to the tyres than Romain Grosjean, who continues to wait for his first points in 2018.

Sergio Perez’s qualifying effort was mighty, and whilst Esteban Ocon qualified four places lower down the order, he was just 0.126 away from the Mexican in a frenetic Q2. However whilst the VJM11 showed promise on Saturday, it does not look yet like a car capable of scoring points on merit. Williams Martini Racing was closer to the pace in China, with a stellar lap from Sergey Sirotkin elevating him out of Q1, ahead of both Toro Rossos. A terrific start from Lance Stroll, gaining the Canadian six places, was similarly impressive, however, neither showed anything more than backmarker pace during the race.

By Nick Golding
3 Mins read
Redemption for Verstappen who masters the treacherous conditions at Imola, whereas the pressure builds on teammate Pérez.
Formula 1

By Fergus Mckie
2 Mins read
AlphaTauri have announced their future steps for their sustainability program and what has already taken place on this program.
Formula 1

By Michael Tuohy
2 Mins read
Post-race penalties give to both Kimi Räikkönen and Lance Stroll for their part in separate incidents.