Jordan hopeful of a strong start at landmark weekend 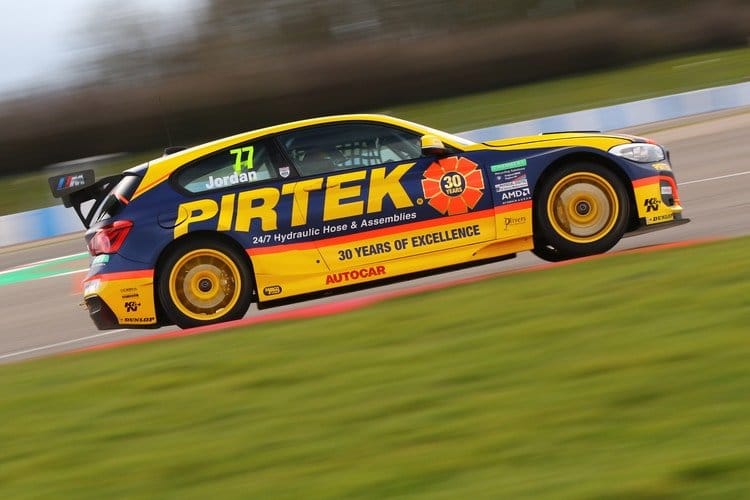 Andrew Jordan’s second season in a BMW 125i M Sport for West Surrey Racing in the Dunlop MSA British Touring Car Championship should hopefully see the 28 year old settled in a familiar car for the first time since 2014.

A former BTCC champion, Jordan is hopeful that the same surroundings as last season can help him towards a succesful and consistent campaign in 2018.

Timed test sessions at Donington Park and Brands Hatch has seen the Pirtek Racing man comfortably within the top six of the timing charts and this bodes well for how well the car may perform over the 30 round championship.

The third and final race at Brands Hatch this weekend will also be Andrew’s 300th start in the BTCC. Since his first appearance back in 2008 he has gone on to score 19 wins, 3 Independent titles and the main prize in 2013.

Speaking ahead of this weekend, “I’m really excited about getting the new season underway and I can’t wait to get started.

“We’ve had a good testing programme where we have worked on a few little improvements to the car, and I feel in a good place going into the opening rounds of the year.”

Andrew also hopes that he can pull off something special on his 300th race.

“We know we have a good car at Brands Hatch after winning there last season and the ultimate goal is to do that again this weekend and pick up some trophies.

“If we could do it in race three in my 300th start then it would be particularly cool.”

As with every other driver, title ambitions are on the mind of the man from Sutton Coldfield and he knows that the season isn’t decided at one race, therefore patience and consistency is paramount to a successful challenge.

“Consistency across the year is going to be key if we want to be in the mix when we return to Brands Hatch for the final rounds.

“With that in mind, it’s important that we come away from this weekend with some good points on the board to lay the foundations for a championship challenge.”