Tom Ingram seven up in the BTCC 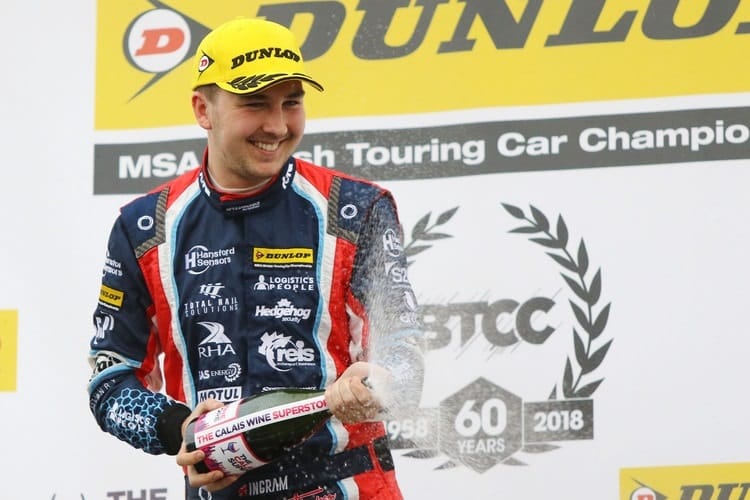 Finishing top of the driver standings plus both independent driver and team championships at the end of the Brands Hatch weekend, Speedworks Motorsport and their driver Tom Ingram could not have hoped for a better start to the 2018 Dunlop MSA British Touring Car Championship.

Lining up ninth after a frustrating qualifying session plagued with understeer, Tom captilised on the proven speed of his Avensis to cut his way through the field to a fourth place finish in race one.

It was looking good for Tom during the start of the second race. However, starting on the wet tyres proved to be the wrong call by the end of the race, thus on lap twenty one begun the onslaught of slick runners blasting past the defenceless Toyota. He fell to eleventh position by the finish making him the second highest placed wet tyre finisher.

Race three was where it fell into place, starting eleventh on the grid and with no ballast on board. Tom drove a fantastic race where the pick of the overtakes was a move on Aiden Moffat in his Laser Tools Racing Mercedes at Paddock Hill Bend just after a safety-car intervention.

Ingram passed the leader after mid-distance and then held onto the lead comfortably for the remaining laps to win his seventh overall BTCC race.

Speaking after his victory Tom said, “After that, I honestly didn’t expect to win race three from so far down the grid, I’m proper chuffed.

“The Avensis was an absolute joy to drive and so stable on the brakes, which meant I could pick people off pretty much where I wanted, it was fun being able to just throw it down the inside into Clearways time after time.”

With new found confidence, Tom and Speedworks are now looking forward to the next round at Donington Park.

“We really seem to have found its sweet spot now and that is all credit to this team and our awesome partners. I think it’s fair to say we nailed Brands Hatch so bring on Donington!”