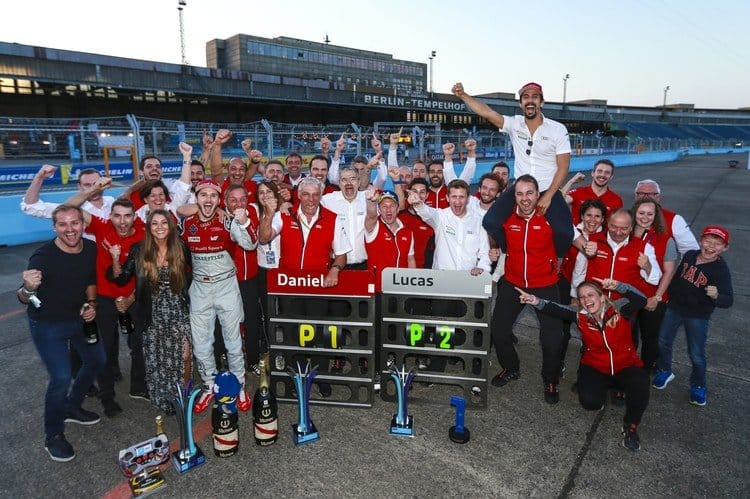 ABT Schaeffler Audi Sport stormed to a dominant 1-2 finish in yesterday’s Berlin ePrix, with Daniel Abt claiming his second victory at home, along with pole position and fastest lap, to claim his first Formula E grand slam weekend, ahead of team-mate Lucas Di Grassi, who finished second.

After the race in Berlin, Abt said: “That was probably the most important win of my career so far and an incredible day from beginning to end.”

“Maximum points with pole position, victory and the fastest lap and then on top of this a one-two for Audi – my thanks go to everybody who supported us. Today there will be a party like never before!”

The day made ever sweeter by Di Grassi showing the speed of the Audi car after coming back from fifth to second, taking only twelve laps to make it a 1-2 for the team.

After the race, the Brazilian said: “First of all congratulations to Daniel who really deserved to win today.”

“Our Audi was super fast today and superior to the competition, so we only actually had to fight between ourselves for the victory. After the pit stop I was right behind Daniel, but I had a problem with my second car that we have to analyze. A dream came true with this one-two for Audi. After the year started so badly for us we are now second in the teams’ championship.”

This result has now elevated Audi into second place in the teams championship, just 44 points behind Techeetah with three races left: Zurich in three weeks followed by the double-header season finale in New York City.

For the drivers, Daniel Abt is one point behind Felix Rosenqvist in the battle for third, while Lucas finds himself in sixth place, within striking distance of his old nemesis Sebastien Buemi.

But can Audi catch the championship protagonists?

In the teams championship, probably yes, with Abt and Di Grassi probably being the strongest line-up on the grid and with a good car they have every chance. But the drivers championship will probably have to wait until next year.

Team principle Allan McNish acknowledged that it was a good weekend for the team, adding that: “A one-two for Audi in Berlin is just unbelievable”

“A clean sweep on home soil, a day just can’t be better than this Saturday in Tempelhof. I’m incredibly proud of the entire team!”