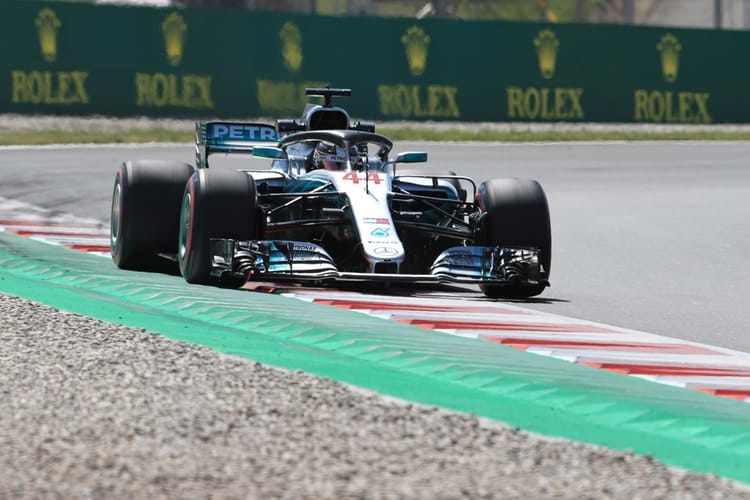 Despite ending Friday afternoon at the Circuit de Barcelona-Catalunya on top, Lewis Hamilton bemoaned the windy conditions that made both Free Practice sessions “tricky”.

Hamilton trailed his Mercedes AMG Petronas Motorsport team-mate Valtteri Bottas in the morning by over eight-tenths of a second, before setting a best effort of a 1 minute 18.259 seconds in the afternoon to edge Aston Martin Red Bull Racing‘s Daniel Ricciardo in a more closely contested session.

Both sessions saw mistakes aplenty from drivers, including Hamilton, with winds providing an air of unpredictability – most pertinently at the chicane of  Turns 7 and 8.

“The day was pretty good, but it was a tricky one because it was so windy out there,” mused Hamilton.

“Every driver was struggling with the changing direction of the wind. You’re constantly arriving at each corner and the wind direction is never the same, so we saw lots of drivers going off.”

The championship leader explained that adverse conditions, such as high winds, can make car set-up “very difficult”; even more so at a track that is notorious for its need for a good car balance. However, the Brit was happy in Mercedes’ start to the weekend. In comparison to times last year, the German marque improved by around two seconds. However, this can be – in part – put down to Pirelli Motorsport opting to bring the super-soft tyre for this year’s edition.

“These conditions make it very difficult to define where the set-up needs to go,” he added.

“We got through all our running and were quite fast compared to previous years. We’ve got some work to do overnight, I’m hoping that it’s cooler and calmer tomorrow.”

The opening to the 2018 season has seen three teams pull away from the rest of the pack in terms of performance, with Mercedes, Red Bull and Scuderia Ferrari all taking victories in the first four rounds. Hamilton said that the battle is “relatively close” at the moment, refraining from sticking his neck out.

“I think it is going to be relatively close between the top three teams but I can’t really say who is quickest at the moment.”

By Michael Tuohy
2 Mins read
Post-race penalties give to both Kimi Räikkönen and Lance Stroll for their part in separate incidents.
Formula 1

By Michael Tuohy
6 Mins read
Max Verstappen took victory at Imola in a race that saw plenty of drama, including a high speed accident that caused a red flag at the halfway point.
Formula 1

By Paul Hensby
2 Mins read
The Miami Grand Prix will join the Formula 1 calendar as part of a ten-year deal starting in 2022.