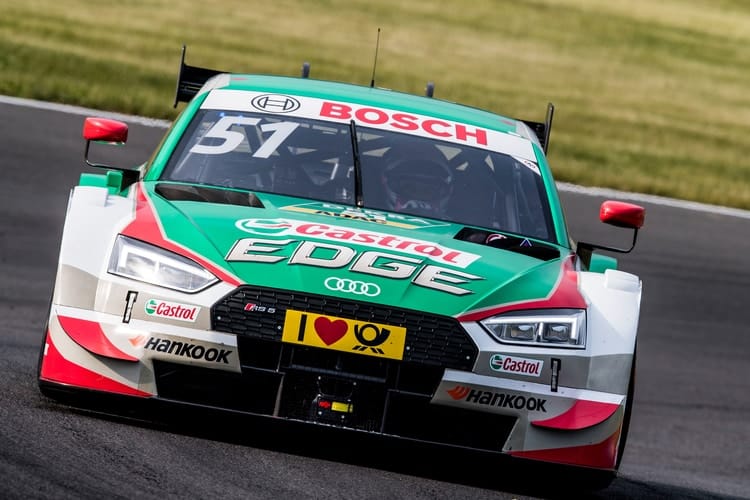 Sunday morning DTM Series practice at the Lausitzring was a stark contrast to how Audi had started the weekend.

At the start of yesterday’s race Nico Müller and Jamie Green did not make it off of the grid, after the Briton crashed into the rear of his team-mate.

Today, they set the quickest times in the session – with credit due to their mechanics for the rebuild that had to be done on their cars.

Only five Audis are being fielded today as a result of René Rast‘s crash yesterday – the reigning champion is unhurt but was not passed fit to race.

The Audi of Loïc Duval was fourth fastest to make it three Audis in the top five.

Gary Paffett was sixth ahead of yesterday’s race winner Edoardo Mortara in seventh.

Championship leader, and the fastest BMW, Timo Glock was eighth.

Pascal Wehrlein was ninth ahead of Mike Rockenfeller who completed the top ten.

The star of yesterday’s race Philipp Eng, who took his first podium in the series in just his third start, was eleventh.

Paul di Resta was the slowest of the Mercedes’ in twelfth.

It was a quartet of BMWs in thirteenth to sixteenth with Bruno Spengler, Marco Wittmann, Augusto Farfus and Joel Eriksson.

Robin Frijns was seventeenth and slowest, however the Dutchman was only eight tenths of a second off of the leading pace of Müller.

By Paul Hensby
2 Mins read
Alexander Albon feels what he does in the simulator with Red Bull will be more important than what he does in DTM if he wants to be back in Formula 1 next season.
DTM

Getting Ready For Some DTM Action