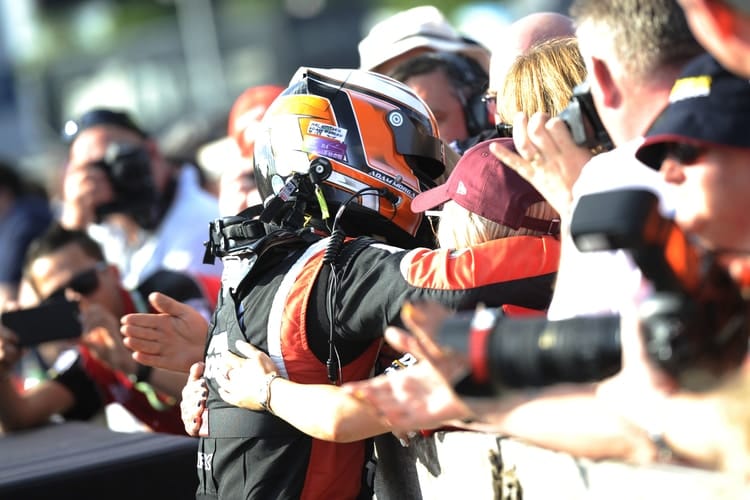 Mac Tools with Ciceley Motorsport driver Adam Morgan has taken his maiden Dunlop MSA British Touring Car Championship pole position after setting the quickest time with only a few minutes of the session remaining at Rockingham.

The close qualifying as seen last year at Rockingham repeated as the top twenty-eight cars were all covered by less than a second.

Heading the timesheet for most of the session was Team GardX with Motorbase driver Sam Tordoff who had to eventually settle for second due to the rapid red Mercedes-Benz A-Class of Morgan. Tordoff sticking with his pink livery from Snetterton highlighted why he’s the best average qualifier this season.

Third went the way of Dan Cammish who bemoaned the amount of traffic and the fact he couldn’t put in a faster lap. Despite disappointment in the immediate aftermath of qualifying, Dan is confident for some good results on the Sunday.

Backing up a strong practice pace, Trade Price Cars with Brisky Racing driver Mike Bushell will line up a strong fourth ahead of the impressive BTC Norlin Racing drivers of Daniel Lloyd and Chris Smiley.

Tom Chilton will start from seventh ahead of Brett Smith who constantly looked like he would threaten the top times but would then back out or be caught in traffic.

Ninth fell to Jason Plato who outqualified his reigning champion team-mate Ashley Sutton in tenth. A result that is sure to please the BTCC veteran who has had a rough ride in comparison to the other side of the garage so far this season.

Outside of the top ten, Colin Turkington was twelfth ahead of Tom Ingram in thirteenth. Vibration issues with the Speedworks Motorsport Toyota Avensis hindering the pace of the current championship leader.

Diamond Double race winner Matt Neal who had an engine change ahead of qualifying could only manage twenty-ninth.

Sam Smelt qualified an impressive sixteenth beating his team-mate in the process whilst new for Rockingham drivers Ricky Collard, Glynn Geddie and Ollie Pidgley will make their 2018 BTCC bows in twenty-sixth, thirtieth and thirty-first respectively. All carried the 45kg of ballast that a mid-season new driver has to take on.