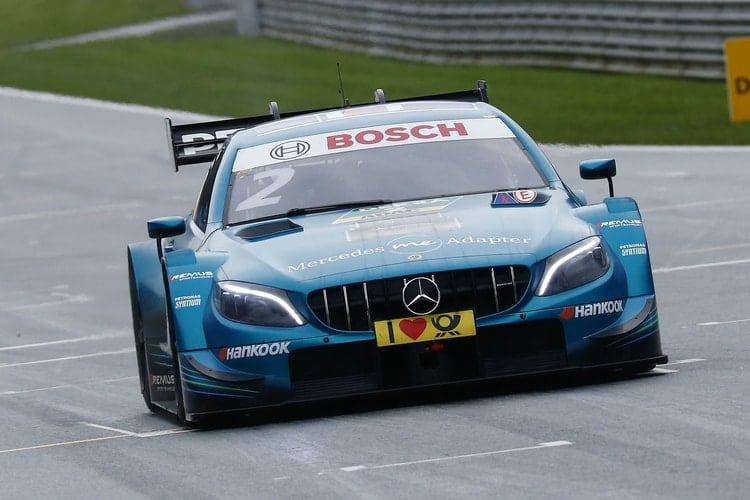 Joining Paffett on the front row on the grid will be Nico Müller, with championship leader Paul di Resta in third.

Augusto Farfus led the drivers out onto the track to get the twenty minute session underway.

After a few laps to get the tyres to temperature, the drivers started putting in their competitive laps.

Di Resta was quickest but was beaten by Mortara, with the top spot rapidly changing hands with it ultimately ending on Robin Frijns.

With some part of the track still damp, the drivers had to be careful not to run wide and lose any time.

Bruno Spengler found the pace to go quickest, with Joel Eriksson and Marco Wittmann making it a BMW 1-2-3 until the Audi of Nico Müller took over the top spot.

With conditions improving, the times were ramping up with René Rast going quickest.

The drivers headed to the pits with nine minutes remaining in the session, for the usual lull in the running.

Six minutes to go, they had all returned to the track to get the action back underway.

With a minute on the clock Pascal Wehrlein went quickest but was immediately beaten by Müller.

Paffett, needing to regain the ground he lost on di Resta yesterday put himself on provisional pole.

Elsewhere there was no significant improvements.

Therefore, Paffett starts on pole with Müller alongside.

Di Resta will start from third, leading a Mercedes trio with Mortara and Wehrlein behind.

Eriksson is the lead BMW in sixth with team-mate Timo Glock behind.

The top ten is completed by Philipp Eng.

Frederic Elsner: “Expectations were absolutely exceeded in the first half of the season”

Who are DTM’s mid-season standout performers?

By Ben Carr
5 Mins read
Halfway into the 2022 DTM season, we look at the year’s standout drivers so far.
DTM