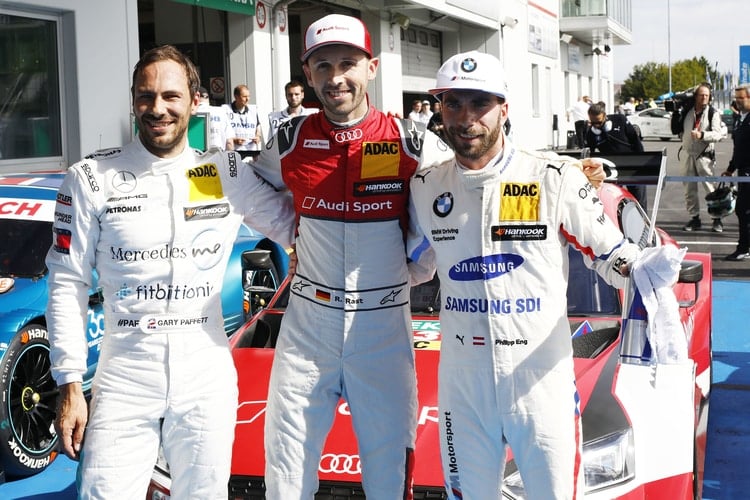 Audi Sport Team Rosberg driver René Rast once again grabbed pole position for the second race of the weekend at the Nurburgring, with a time of 1:22.140, beating Mercedes-AMG Motorsport Petronas racer Gary Paffett by six-thousandths of a second.

The top three was completed by BMW’s Philipp Eng, who was displaced by the top two in the dying stages of the session, while Eng’s fellow BMW driver Timo Glock ended up fourth and will be hoping to claim a podium position in the race this afternoon.

The third row of the grid will be an all-Mercedes AMG affair, with Lucas Auer just ahead of Pascal Wehrlein. They find themselves just ahead of podium finisher from yesterday, Bruno Spengler, with BMW drivers Marco Wittman and Joel Eriksson completing the top ten.

Meanwhile, former championship leader Paul Di Resta for the Mercedes-AMG Motorsport Remus squad qualified eleventh for today’s race and after a non-score yesterday, the Scot will be determined to make up for it in the race this afternoon.

“Unbelievable. When things are going well, they are going really well,” said a delighted Rast after the end of the session.  “The second pole for me this weekend. Yesterday, we have seen what can come out of it. With the three points from qualifying, I have now moved ahead of Marco Wittmann to fourth in the championship. Now, I have to catch Edoardo. I hope for another podium finish in the race.”

Rast is now in a position to achieve a historic feat, as in the new era of the DTM, no driver has yet succeeded in scoring the maximum number of points during one weekend.

The second race of the weekend from the Eifel Mountains will begin at 13:30 local time.

The Future of DTM

By Mark Cridland
1 Mins read
With the end of Class One cars in DTM, what does the future hold and how are the changes going to affect the sport?
DTM

By Mark Cridland
3 Mins read
Another all Audi podium means that the DTM manufacturers championship is all tied up for this season with Audi being well ahead with 827 points compared to the 356 points of BMW.