Ricky Collard said he was caught by surprise by a ‘scary’ lap as he secured a front-row start for the first Dunlop MSA British Touring Car Championship race of the weekend at Silverstone for Team BMW.

Collard joins the Motorbase Ford Focus of Sam Tordoff on the front row for the opening race around the National circuit, competing in only his third BTCC meeting after taking over from sidelined father, Rob Collard.

“I thought the dash wasn’t working”, Collard Jr told The Checkered Flag after qualifying. “It didn’t feel like a very good lap was what I told the team, so I said ‘where am I?’

“They told me I was P2, and I was thinking ‘really? There must be a problem with the timing screens!’.

“With being on the other side of the fence for years, to finally be given the opportunity to maximise it like that is just scary”, he added. “It’s mad.”

The session at one stage saw all-but-one car separated by less than a second, Collard Jr admitting that it has taken time and additional tuition from his father to discover how to get the most out of the latest BTCC machinery.

“It’s just so difficult and you can just see that today. If you’re two tenths off, you’re 10 places further down the grid, so you have to make sure that you maximise everything and get your mind to that level.

“It’s a lot a psychological stuff that goes on in touring cars. It’s not just getting in it and driving it. It’s a lot, lot different to a GT race. 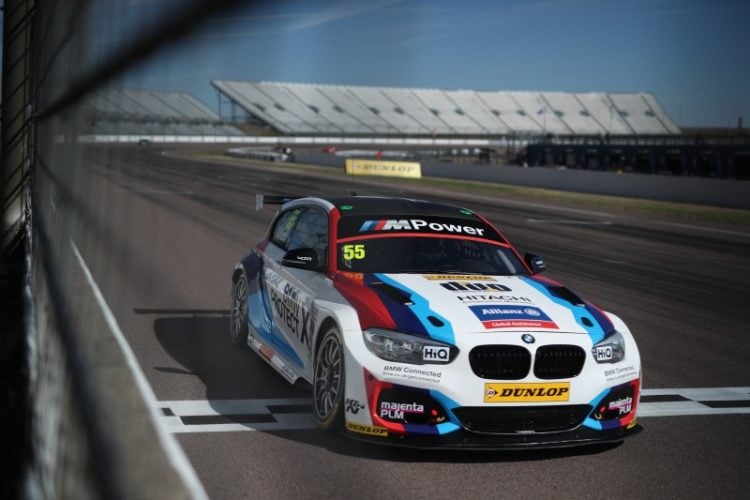 “I’ve been trying all sorts from touring cars to GTs, DTM and Formula 3, but I’ve been trying to put it all into this car and it isn’t working. It’s such a unique beast. The 1 Series is quite tail-happy, but my Dad was telling me not to worry about it sliding.

“I had some huge moments out there and lock-stocked it through turn one, then looked down at the delta times and I’m up. I say it isn’t very good, but it’s the driving style to use. It’s getting better and we’ve got to chip away at it.”

Collard Sr remains sidelined after a Snetterton accident aggravated an old concussion injury, picked up at the Silverstone meeting last season. While his return date remains uncertain, he was able to praise his son’s best qualifying to date.

“The first test he had was here at Silverstone [pre-season]”, said Collard Sr. “Ricky took over from me while I was still out and that was where Dick Bennetts saw him and went ‘f***ing hell!’ He’s now showing what he can do, and this is a great chance for him.”

Collard Jr says that the advantage of rear-wheel drive gives him the best possible chance to lead a BTCC race for the first time on Sunday, something he is optimistic of.

“For the race tomorrow, I’ve got the right car for it so I have no excuses not to lead at the first corner. There’ll be a lot of leg shaking, but I need to get in front of Sam and he needs to stay in front of me. I need to use the RWD advantage to get off and go.”