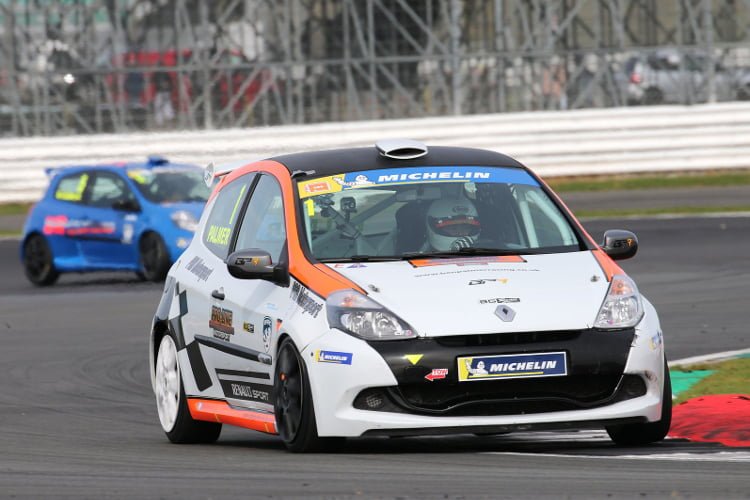 Ben Palmer was cruelly denied a perfect season in the Michelin Clio Cup Series as a retirement in the final race of the season ended his 100% winning streak for the year.

After winning the opening race of the season finale at Silverstone, a race two mechanical failure opened the door for Ben Colburn to secure his maiden victory and vice-champion honours.

The final weekend of the season started in surreal fashion as extreme wet conditions meant qualifying took place behind the safety car, with the grid then set by championship position.

That gave Palmer, who wrapped up his second consecutive title last time out at Anglesey, top spot for both races and he went on to take full advantage in the opening encounter.

Palmer was in imperious form as he pulled nearly two seconds clear on the opening lap before posting the fastest lap on his way to a seven second victory.

Behind Palmer, the focus was on a four-way battle over the vice-champion honours as 28 points split Simon Freeman, Colburn, Ronan Pearson and Tyler Lidsey ahead of the meeting.

Freeman had the advantage courtesy of qualifying, however Colburn picked him off on the opening lap of race one and drove clear for a crucial podium finish, with Freeman third.

The drive of the race came from the returning 2015 Road Series champion Luke Pinder, who stormed through from tenth on the grid to an impressive fourth place.

Palmer would lead the opening lap of the final race of the season, however on lap two his charge ended with a snapped throttle cable – a heart-breaking end to his perfect year.

Freeman therefore seized the race lead, however on lap five Colburn stormed past heading down the back straight, with Pearson following him past.

From there, Pearson kept in touch with the leader however Colburn held firm and came away with a maiden series win to back up his recent impressive UK Clio Cup finishes.

Freeman completed the podium again to ensure he ends the season third in the points, only three points behind Colburn in the final standings.

Guest driver James Colburn took a fourth place finish ahead of Pinder and Robinson, with Lidsey dropping back to ninth after having to make a quick trip to the pitlane.

While Palmer couldn’t complete a perfect season, Nic Harrison was able to do exactly that in the Road Series as he added another pair of wins at Silverstone.

From a double pole position, Harrison went on to take a two second win in the opener, before going a second and a half further ahead in the final encounter.

Second and fourth place finishes in the two races confirmed James Joannou as the class vice-champion, while Tom Oatley ended the year with a double podium.

Richard Colburn meanwhile joined his two sons on the grid as he returned to the grid for the first time since the 2017 season opener, taking a great third place in race two.