Mick Schumacher: “I am so very grateful for being able to experience this” 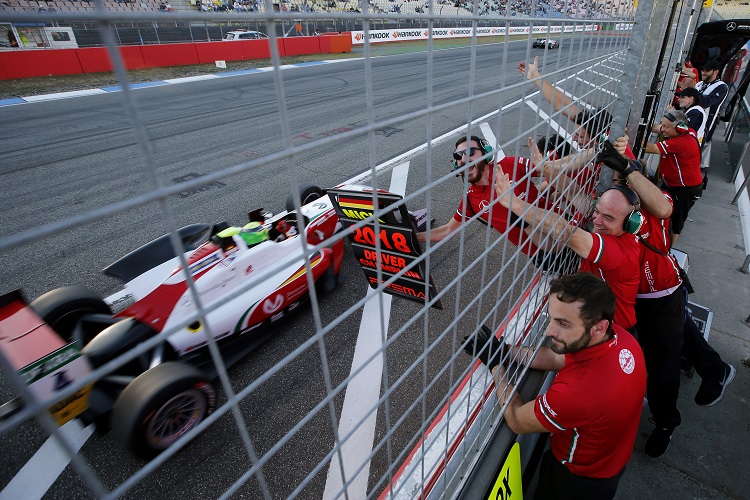 Mick Schumacher was grateful to his Prema Theodore Racing team after the German clinched the 2018 FIA European Formula 3 Championship title with a second-place finish in race two at the Hockenheimring on Saturday afternoon.

The nineteen-year-old German had come into the weekend in Germany with a forty-nine point advantage over Daniel Ticktum but failed to score in race one after taking damage from a collision with team-mate Marcus Armstrong on lap one, while he also earned himself a reprimand and a penalty point on his licence for pushing Ticktum off the track as he trailed back to the pits for a new front wing.

However, despite a couple of wild slides at turn one, Schumacher did everything he needed to do in race two, finishing second to Motopark’s Jüri Vips to become the champion, and he admitted his delight at securing the crown.

“An unreal feeling, I am so happy about that championship!” said Schumacher.  “At the same time I am so very grateful for being able to experience this, to live my dream and to have such a strong team behind and around me – that title is because of and for them!

“Everybody at Prema has worked extremely hard to celebrate that title now, we had a very cool year together. I have to admit that the fact that I am Champion has not yet arrived at my mind totally, but I am sure I will enjoy it fully.”

Schumacher hopes to finish the season strongly on Sunday when he starts second on the grid alongside pole-sitting team-mate Robert Shwartzman.

“Let’s now finish the season in style together,” insisted Schumacher.