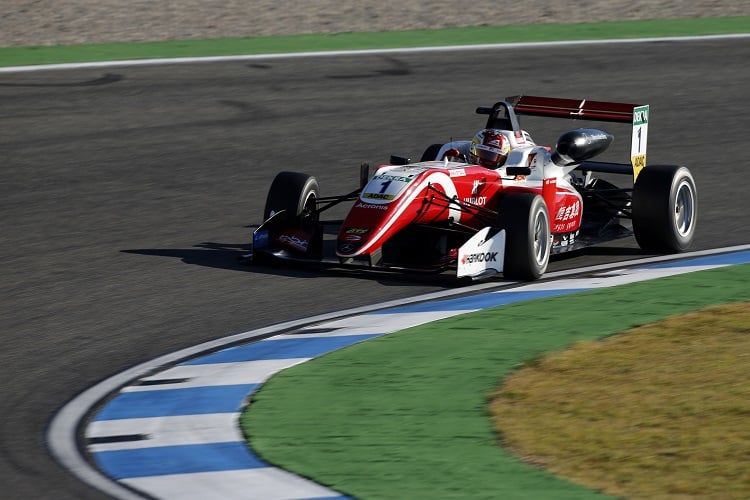 Guanyu Zhou claimed the opening victory of the weekend at the Hockenheimring, while an incident involving Mick Schumacher denied him the chance of clinching the title at the earliest possible opportunity.

Schumacher collided with Prema Theodore Racing team-mate Marcus Armstrong on the opening lap heading into the Mercedes Arena, breaking his front wing that required a change in the pit lane at the end of the lap, although he still had time to squeeze title rival Daniel Ticktum off the track heading into the Arena section.

Schumacher was handed a reprimand and a penalty point on his licence for the manoeuvre, even though Ticktum was able to continue and finish fifth to ensure the championship battle continued.

A safety car was needed as Alex Palou and Jehan Daruvala collided exiting the Spitzkehre hairpin as the latter hit the wall on the left hand side of the circuit, which allowed both Schumacher and Armstrong to catch the back of the pack after both pitted for repairs, however it was not long until the New Zealander called it a day, ending his very remote chances of the title in the process.

Zhou had kept the lead at the start and maintained his advantage following the safety car and another one for a collision between Fabio Scherer and Ferdinand Habsburg and was able to lead a Prema 1-2 ahead of Robert Shwartzman, the Chinese driver 2.075 seconds ahead of the Russian at the chequered flag, which was accidentally flown one lap early by the officials.

Shwartzman was forced to focus more on defending from Jüri Vips than attacking for the race win, but he was able to deny the Motopark driver second place, while Palou survived his clash with Daruvala to claim fourth for Hitech Bullfrog GP.

Ticktum made some good moves to climb to fifth but the Red Bull Junior will need a podium finish, from fifteenth on the grid, to stay in contention for the championship in race two, and that’s if Schumacher fails to score!

Ralf Aron was one of those to fall behind Ticktum but claimed sixth for Prema Theodore Racing ahead of Carlin’s Sacha Fenestraz, while Nikita Troitskiy of Carlin held off Hitech Bullfrog GP’s Enaam Ahmed for eighth, while Van Amersfoort Racing’s Frederik Vesti took tenth and the final point on his series debut.

Schumacher made gains during the green flag running to climb from the back of the field to twelfth, but ran out of time to claim a point, finishing on the tail of Carlin’s Julian Hanses.

One championship was decided in race one, with Shwartzman claiming the rookie crown, but all attention now turns to race two and a possible crowning of a new FIA European Formula 3 Champion.