A gap of just two-thousandths of a second at the head of the times between Ferrari’s Sebastian Vettel and Mercedes’ Lewis Hamilton is a mouth-watering prospect for the racing-starved fans desperate to see the Formula 1 run in anger in Melbourne. After the first test produced so few concrete answers, it was intriguing to see the pre-season action end on such an ominously competitive note.

However, if anything, the second test served to inflate the expectations surrounding a high-flying Ferrari, with many paddock sages suggesting the Scuderia’s advantage is as much as half a second. The first salvos in 2019’s media proxy war – with Mercedes playing up Ferrari and Ferrari playing up Mercedes – were further indications of a shift in the balance of power.

Away from the championship contenders, there was unfortunately only one team who could be ranked with any degree of certainty. So, whilst the midfield promises to be just as frantically competitive as last year (perhaps even more so) Williams appears to be even further away from any kind of dignity.

Whilst the second test was much more informative than the first, a fresh infusion of new development parts and the baffling array of six tyre compounds (C1-5 plus a development tyre) further confounded any attempt to disentangle the running order. And that is without making the usual caveats about engine mode and fuel load that always applies to testing.

When Williams rolled its car out last Wednesday, having missed two and a half days of testing and having not turned a wheel, there was at least the faint hope that the car could still be competitive once it got up to speed. A week later, despite having caught up in the mileage stakes, that hope is gone.

The FW42 will start the season as the slowest car and not in especially close proximity with the midfield. The car burned through its tyres at an alarming rate – suffering a 1.6 second time loss across ten laps on the harder C2 and suffering a time loss approaching three seconds on the softer C4 and C5 compounds. On shorter runs the car looked, at best, half a second off the back of the field. It’s difficult to see how the team will survive the opening races without major personnel changes.

Despite being bolstered by its newfound financial security, the tenacious Silverstone team arguably had one of its least convincing pre-seasons for many years. The rebadged Force India squad struggled for mileage throughout both tests, persistently niggled by minor recurrent issues. Lance Stroll took Racing Point’s lap tally into triple figures for the first time on Thursday.

Pace-wise the vanilla RP19 was unsurprisingly underwhelming. A lack of major developments over an above the 2018 car saw Racing Point gravitate towards the rear of the midfield. Stroll’s time of 1:17.556s on the softest C5 tyre did at least put him within touching distance of the rest of the midfield, however much of Racing Point’s early season hopes will hinge on a development package scheduled for Melbourne.

Despite having written headlines with some chart-topping C5 barnstormers in the opening days of the final test, the MCL34 doesn’t look like it’s moved McLaren much closer to reclaiming any kind of dignity. The car might not be the backmarker monstrosity that limped over the line at the end of last season, but the ominous signs of the same rear instability are clear to be seen.

A lap of 1:17.144s on C4 tyres might have put Carlos Sainz Jr. on top of the times on Wednesday, but it did look dangerously close to the McLaren’s ultimate potential, with many of the team’s midfield rivals subsequently setting laptimes deep into the 1:16 range. Worse still a tendency to wear through the tyres didn’t correct itself in the second test, although McLaren is at least close to the main scrum of the midfield.

Whilst it felt like Alfa hit the ground running in the first test, the rebadged Swiss squad rather lost momentum in the second week as many of its midfield rivals upped the ante. The C38 still looked strong on-track – the agile and responsive front axle looked consistently impressive through the Turn 11-12 direction change.

But the laptimes were less convincing. With Kimi Raikkonen and Antonio Giovinazzi falling to thirteenth and sixteenth in the combined times, Raikkonen’s best lap on the C5s would fall more than four-tenths shy of Nico Hulkenberg‘s 1:16.843. Of course, it is entirely likely that Alfa is keeping performance in reserve having produced a car that is a visible step forward from the C37 in balance and grip. A hearty mileage tally would also vindicate the team’s confidence. However, on the numbers alone it would probably be a surprise to see an Alfa in Q3 in Melbourne.

By whatever measure you choose, Toro Rosso had a thoroughly good fortnight of testing. The team racked-up some 935 laps – 102 more than the senior team. Rookie Alexander Albon showed impressive speed and confidence from the outset (excusing his out-lap indiscretion last week), logging a noteworthy 1:16.882 lap on the softest C5 tyres.

Toro Rosso is one of several teams whose fortunes appear to be little more than speculation. A reliable and seemingly competitive Honda power unit, a pair of unknown quantities in the cockpit and a chassis that perhaps lacks the visual dynamism of some of its rivals all makes for a rather ambiguous package. Toro Rosso could truthfully factor anywhere in the ultra-competitive midfield melee come Melbourne.

Haas is probably the most difficult team to read in the field. Autosport’s Edd Straw has consistently believed Haas is a midfield dark horse for 2019, whilst F1 TV’s Will Buxton has maintained that the team will go backwards this year. It’s easy to see why the VF-19 has been such an enigma: the squad lost serious mileage in the first test due to electronic niggles and continued to lose laps thanks to an exhaust issue on Thursday. 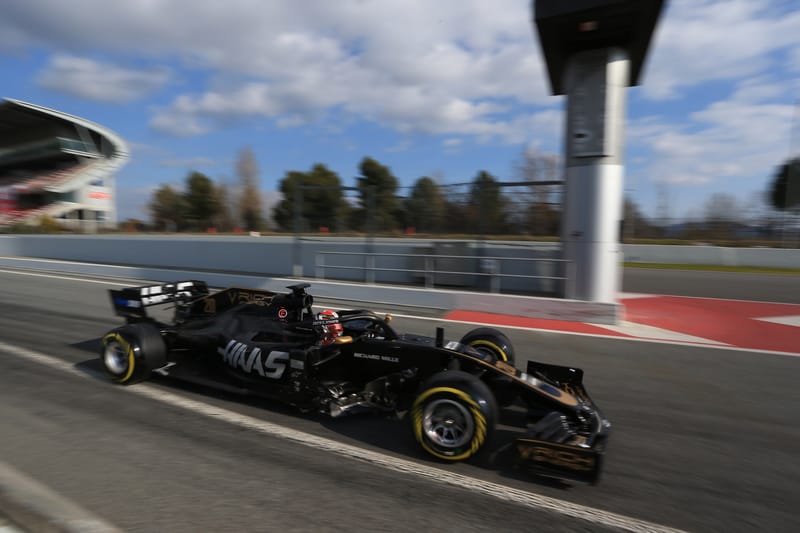 The performance runs take a lot of unpicking. Haas’ best lap of the test – Romain Grosjean‘s 1:17.076 on Friday – falls a quarter of a second short of Hulkenberg’s best. However, a lap from Thursday – Kevin Magnussen‘s 1:18.199 on the harder C3 tyre – would arguably put Haas fractionally ahead of Renault once compound corrected. Also, the Haas was ominously slow in the speed traps.

Renault arguably leaves Barcelona as the second happiest team behind Ferrari. Cyril Abiteboul and Remi Taffin have been gushing with sweet words about big engine gains and high targets. Daniel Ricciardo and Nico Hulkenberg have been largely complementary about a chassis that looks very respectable on-track. Despite some pacey C3-shod sniping from Magnussen, most pundits now agree that Enstone is set for a season in no-mans-land.

Indeed, with Hulkenberg reprising his ‘best-of-the-rest’ moniker to set the best non-Ferrari/Mercedes lap of testing, it’s only really the proximity of the Toro Rosso that suggests Renault can’t fight Red Bull. Despite being marginal on spare parts throughout testing, a solidly reliable car and the third highest lap count of any team ranks Renault as one of the best prepared teams heading to Albert Park.

The opening test was a display of quiet confidence from Red Bull, but a week later, a heavy crash and an even heavier loss of mileage has rather seen that confidence evaporate. A newly updated Mercedes and a meteoric Ferrari had already put Red Bull into a likely third place before Pierre Gasly‘s second unforced trip to the barriers left the RB15 with heavy damage.

This left little time for performance runs, and as a result Gasly and Verstappen slumped to 11th and 17th in the combined times. If you rummage through Red Bull’s disrupted test there is one morsel of single-lap pace. Allowing for the tyre delta, Gasly’s 1:17.715 lap on the C3 tyre from Tuesday would put Red Bull within nine tenths of Ferrari’s theoretical best. Whilst it is apparent that Red Bull remain clear of the midfield, it is unlikely that it will be fighting Ferrari or Mercedes in the early races.

The reports on Mercedes’ underwhelming start to testing varied from proto-crisis to fuel load/engine mode fudge factor. The usual caveats about testing all applied but that didn’t explain why the W10 looked visibly less capable on-track than its Italian nemesis. Just as the paddock prepared to declare the world champions under pressure, a deluge of new upgrades appeared on the car.

Not that this B-spec overtly transformed the car, with paddock calculations still putting Mercedes solidly behind Ferrari on both short and long runs. On Friday, Lewis Hamilton proclaimed the deficit was as much as half a second – before trying to contradict himself by lapping within two-thousandths of Vettel’s top time. Showboating aside, the paddock consensus appears to be that Mercedes has a considerable but not insurmountable pace deficit: a fine recipe for the season ahead.

The fact that a violent rim failure on Wednesday was such a forgettable blemish to Ferrari’s pre-season is tribute to an outstanding fortnight for the Scuderia. No matter how you slice it, the SF90 adds up to an ominously fast car. On-track the car was compliant, forgiving, agile, predictable – all the racing driver buzzwords.

On the timing screens Vettel appropriately put Ferrari to the top of the times. However, it wasn’t the German’s C5 benchmark that set the paddock tongues wagging. Instead Vettel’s 1:16.720 on the mid-range C3 tyre would correct to a 1:15.8 by even the most conservative attempt to correct the tyre delta to the C5. Having produced impressive pace across the full range of tyres and fuel-loads, a rejuvenated Ferrari will rightly head to Melbourne as the early favourites.

By Fergus Mckie
2 Mins read
Dave Robson has been really impressed with both Williams drivers throughout the weekend at Imola, with both cars making it into Qualifying-2.
Formula 1

By Paul Hensby
2 Mins read
Antonio Giovinazzi’s final Q1 lap was wrecked by Nikita Mazepin passing the Italian at the start of the lap.