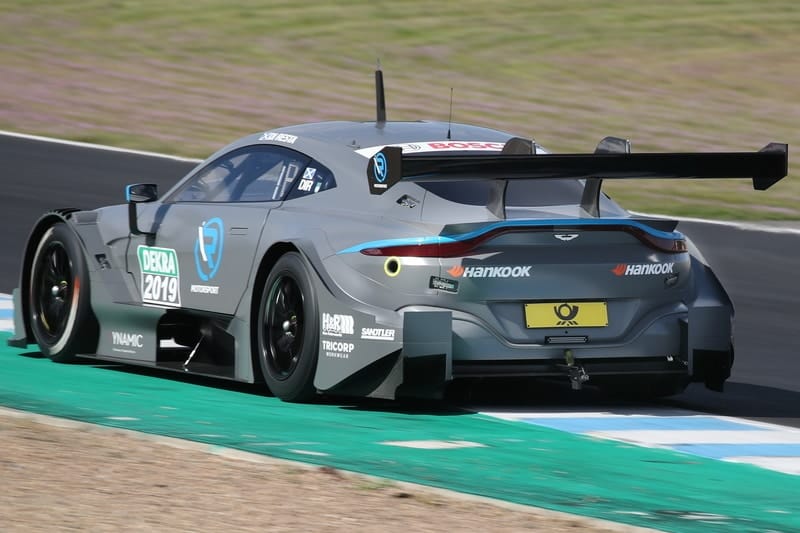 DTM Series champion Paul di Resta had the honours of getting behind the wheel for the first on track appearance at Jerez de la Frontera.

After just six laps di Resta and the team felt that everything was right and that car had successfully passed the trial despite just 90 days of development and construction.

Testing officially gets underway tomorrow with di Resta once again getting behind the wheel for the first two days.

It will also be the first time the DTM newcomers will see how they compare to Audi and BMW.

“The car felt good right from the start,” said Paul Di Resta, reporting his first impressions at the wheel of the Aston Martin Vantage DTM car. “The team has done an incredibly good job of bringing such a beautiful and highly driveable racing car onto the track in such a short time. Right from the roll-out, everything was working perfectly, and I immediately had a good feeling in the car. I’m now looking forward to it to the first test session tomorrow.”

R-Motorsport Team Principal Florian Kamelger, added: “The technical team has done a terrific job. Getting the Aston Martin Vantage DTM car track ready in well under 100 days has to be a DTM record. The car is an absolute stunner to look at, and the first impressions registered by Paul are promising. Although we still have a lot of work ahead of us before the season opener at Hockenheim, we can feel confident that we’ve got the basics of the car right.”

To comply with DTM regulations, the dimensions of a standard Aston Marin Vantage had to be adapted; with it coming out as 4.73 metres in length, 1.95m wide and 1.28m high.

Another challenge was the development of the new four-cylinder turbocharged engine.

Jake Dennis takes over from di Resta on Thursday with Ferdinand von Habsburg getting his chance behind the wheel on Friday.