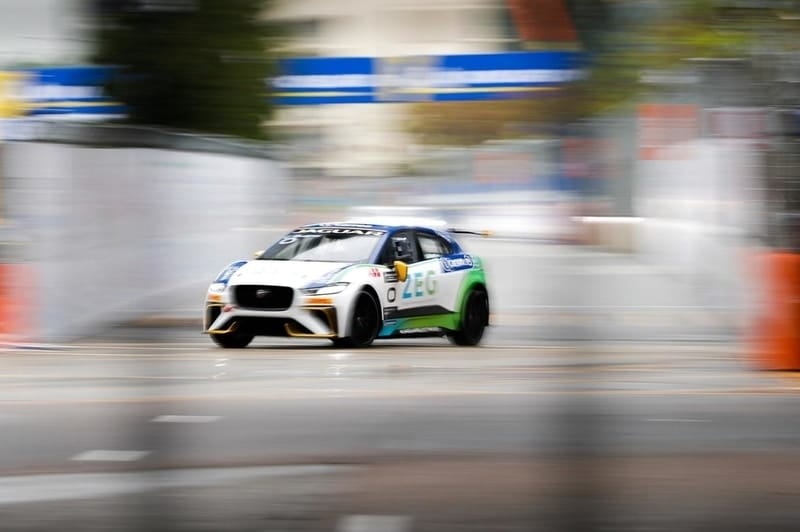 Caca Bueno for Jaguar Brazil Racing took a stunning pole position in difficult conditions to beat Bryan Sellers from Rahal Letterman-Lanigan Racing by over three-tenths of a second, who was closely followed by round one winner Simon Evans and TWR Techeetah racer, Stefan Rzadzinski, who were both half a tenth further behind.

Championship leader heading to Hong Kong, Katherine Legge, after victory at the last round in Mexico City ended qualifying only fifth just ahead of the first Pro-Am drivers with Yaqi Zhang from Team China Racing only a couple of tenths of a second off Legge.

Jaguar VIP driver for this weekend is local sportscar driver Darryl O’ Young, who qualified seventh, a couple of tenths further behind.

The battle between the two Saudi Racing cars of Bandar Alesayi and Ahmed Bin-Khanen once again went the way of Alesayi, who will line-up in eighth and ninth positions respectively. They were both ahead of Celia Martin with the last qualifier to set a lap was Qi Lin, some 2.1 s off the pace.

However, Sergio Jiminez, who is tied for second in the championship with Evans and Seller suffered a mechanical issue during the session and will be hoping to fight his way through the order in the race later on.

By Robert Percy
1 Mins read
McLaren are set to explore a possible entry in to the 2022-23 FIA Formula E season following the end of their contract to supply batteries.