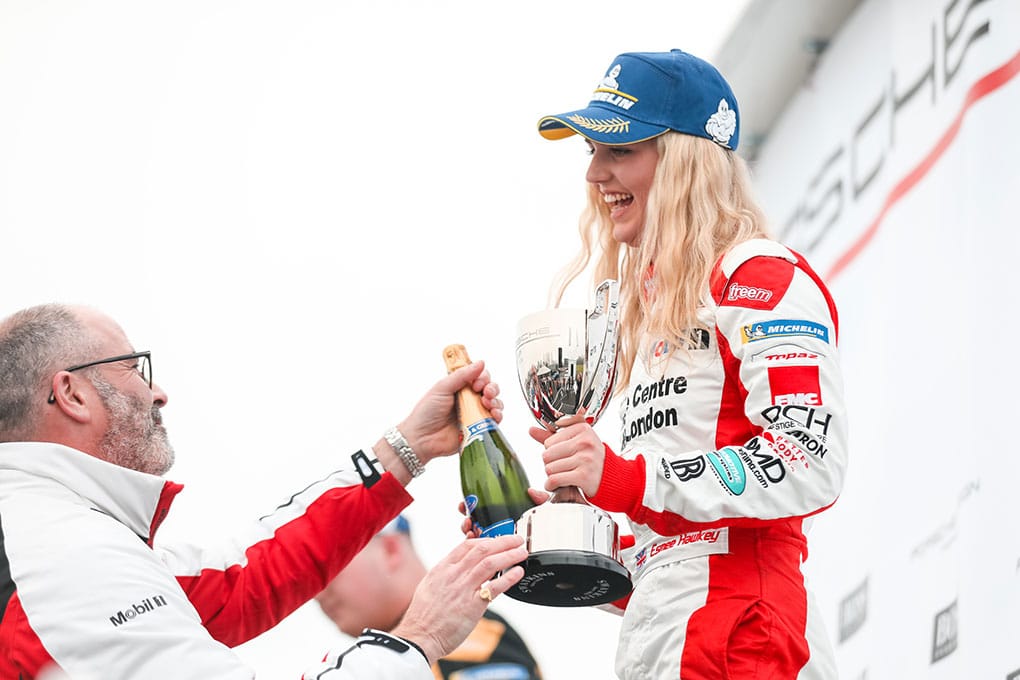 2019 is shaping up to be a very promising year for Esmee Hawkey, after securing her place in the inaugural year for the W Series, she switched her focus back to the Porsche Carrera Cup GB campaign with GT Marques and the opening weekend of the series at Brands Hatch.

Friday saw TOCA package competitors get the opportunity to run on the Indy circuit in preparation for qualifying on Saturday.

“Friday Free Practice one and two were really positive and we were first in the Pro-Am class in both sessions, so I was really happy with that,” said Hawkey.

Unfortunately the dry weather that was seen on Friday disappeared ahead of qualifying, with clouds bringing in a wave of fine mist-like rain, making it challenging for competitors as they chose between running on slick or wet tyres.

“In Saturday qualifying the weather turned and it was miserable compared to Friday. We had the horrible spitty rain that was in the middle, halfway between wet and dry.

“We started on old wets for a run and then changed onto new wets and did a time that put us second when the track was at its wettest.

“After that there was a small window where people were able to run on slicks and we missed it which was unfortunate but that’s how it goes.”

With the missed opportunity Hawkey finished the session in fourteenth place overall and fourth in class, as the delayed race one approached the weather offered similar conditions to qualifying, forcing competitors to gamble on their tyre choice. Thankfully for Hawkey it went the right way and she drove an impressive race  to finish second in class and sixth overall.

“I wasn’t happy after qualifying, so we had a lot of ground to make up. Race one was similar weather, but we went for slicks, as most people did, and we went from fourteenth to sixth and we had some great racing.

“I kept it clean and pushed every lap and we ended up second in class.”

After lining up on the third row of the grid for race two, Hawkey found herself bogged down at the start, dropping down to tenth overall and last in class. A strong run in the race proved promising as the Kent racer

“In race two I was disappointed in myself as I got a bad start and fell back behind my Pro-Am competitors, so instead of being second I was fourth.”

Despite showing promising pace through the race as she battled with Jamie Orton, Jack McCarthy and Tom Roche, she could only recover to ninth pace overall as the short Indy circuit presented few opportunities to overtake.

“It was so close, and the lap times were so consistent but, unfortunately, we finished fourth.

“Overall though I’m really happy. We know what we need to work on, but we were quick enough to be racing up there so hopefully we can go for some race wins at Donington.”