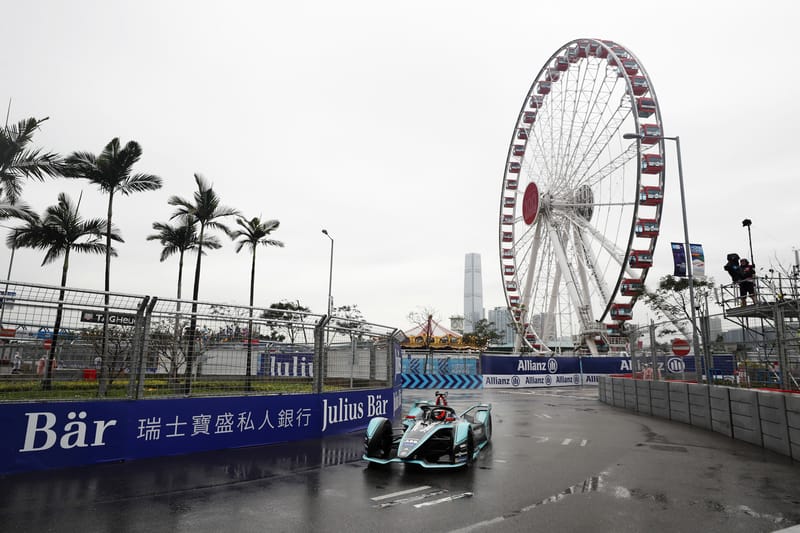 Mitch Evans won the 2019 Rome ePrix in a chaotic encounter to bank his and Panasonic Jaguar Racing‘s first win in the ABB FIA Formula E Championship.

The race began when his rival Andre Lotterer started on pole position after an intense wet/dry qualifying session, as Evans kept his nose clean to line up second.

However, only a lap into the event and Jose Maria Lopez slid over the kerb and crashed into the barrier, causing half of the field to gridlock behind. That resulted in a red flag for forty-five minutes to reshuffle the pecking order back to the appropriate positions before the safety car restart.

The pack settled down after the restart before Evans and Lotterer took the battle for the race win on track. The use of his first attack mode allowed the Kiwi to pull alongside the German and was through into the lead with around fifteen minutes left in the event.

Despite Lotterer using both of his two attack modes in an attempt to get back past Evans, the New Zealander was able to fend off and complete a remarkable afternoon for him and the Jaguar team.

Stoffel Vandoorne, who had started fourth, managed to keep his car out of trouble to claim the first podium of his Formula E career and boosts HWA Racelab‘s points tally to put them further clear of NIO and GEOX Dragon Racing to go ninth in the teams’ standings.

Robin Frijns finished a solid fourth, ahead of the two Nissan e.dams cars of Sebastien Buemi and Oliver Rowland bringing a double points finish for the team.

Antonio Felix da Costa, who went into the weekend as the championship leader, but came home in ninth behind Jerome D’Ambrosio. The result means the Mahindra Racing pilot inherits top spot in the drivers standings by a single point over the Portuguese.

Sam Bird unfortunately had another low key race in Rome. The Brit started in the thick of the field once again in thirteenth before rear suspension damage due to contact with Jose Maria Lopez looked to have ended the Envision Virgin Racing driver’s race on the spot.

However, with the red flag coming only moments later, Bird’s pit crew were able to fix his car in time for the restart, but the Santiago race winner was not able to recover to finish in the points.

Jean-Eric Vergne did not fare much better, as he ran as high as sixth before a time penalty for overtaking da Costa under a full course yellow dropped the Frenchman to fourteenth in the final classification.

The Rome result though has moved Vergne’s team DS Techeetah to the top of teams standings by seven points over second place Virgin. In the drivers table, only thirteen points separate the top nine in what is turning out to be a thrilling fifth season of Formula E.

Paris will be next location for the series on the 27th April, and Jean-Eric Vergne will be hoping to redeem himself and replicate his home victory from last year.