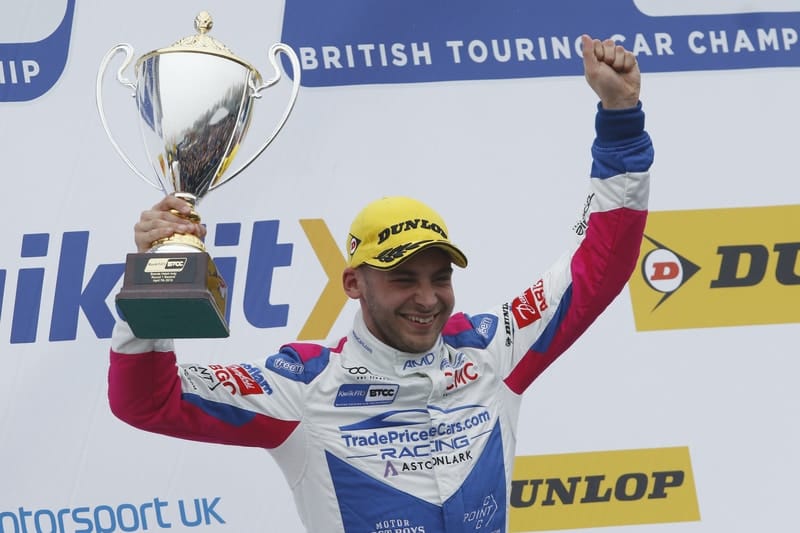 Jake Hill exceeded both his and Trade Price Cars Racing’s expectations last weekend when on the first race of the day he scored his second ever Kwik Fit British Touring Car Championship podium finish in tricky conditions at Brands Hatch.

After qualifying in fifteenth position, where he claimed he would have been ecstatic with at January’s Autosport International, tyre choice was going to be tough for the first round considering the fact it looked like rain was about to pour onto the circuit.

Gambling with slick tyres, Jake enjoyed a repeat of the second race of 2018 at Brands Hatch when he capitalised on his tyre strategy to carve his way through the field and score an excellent second place. Not only was it Trade Price Cars’ first ever podium on their début, but it was also the best ever finish for the Audi S3 Saloon in its BTCC history.

Despite carrying ballast for the second race, the Audi seemed to be set up perfectly for Hill and he went on to secure a superb fourth position at the flag adding to an already impressive early points haul.

Whilst in race three it looked like he was going to celebrate a hat trick of top six finishes, contact with Ashley Sutton resulted in damage and eventually retirement from the race. However, this incident shouldn’t blot what was a superb weekend for the twenty-four year old.

“It’s been a great way to start the season and I have to say a huge thank you to everyone in the Trade Price Cars Racing team for their work.” Said the driver from Kent,

“To come away from Brands Hatch with a podium finish is fantastic and has given us something to build on.

“The opening race was similar to last year with the call on the tyres and we got it spot on. Slicks was certainly the right way to go and when the conditions came to us, the Audi was mega and I could pick people off and work my way forwards.”

With confidence aplenty after that opening weekend. Thoughts are now focussed on the next round at Donington Park, “We haven’t come into the season aiming for the championship, but we head away from Brands Hatch with some good points on the board and will aim to carry this momentum into Donington Park next time out.”