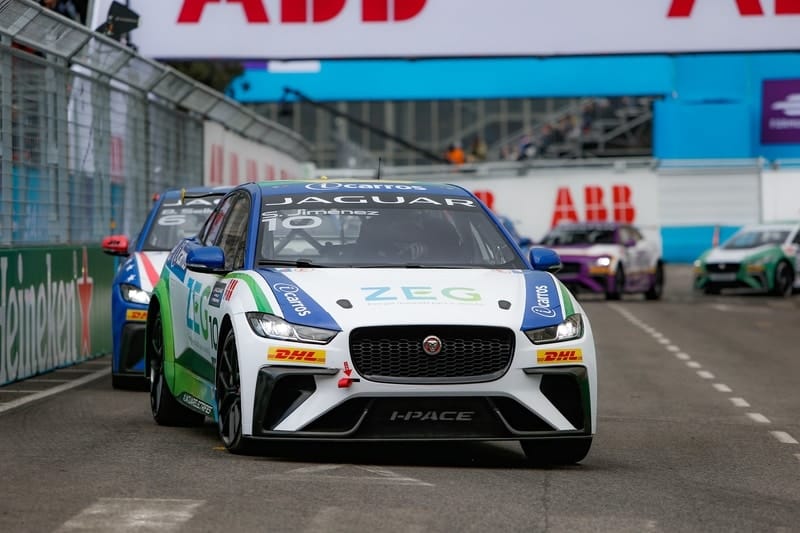 The penultimate round of the inaugural Jaguar I-Pace eTrophy takes the all-electric single make production car championship to the Templehof Airport Circuit in Berlin where Bryan Sellers leads the 2018-19 Jaguar I-Pace eTrophy by a single point over Jaguar Brazil Racing driver Sergio Jimenez with two rounds and three races to go this season.

Caca Bueno and Sergio Jimenez secured the first 1-2 of the season for Jaguar Brazil Racing at the last round of the Jaguar I-Pace eTrophy on the streets of Monte Carlo, but after securing another podium finish in the principality, Sellers maintains the points lead with just three races to go.

Before taking to the track this weekend, current championship leader Bryan Sellers said, “I found Monaco to be a challenging event personally. The track was very different to what we are normally used to.

“The Berlin track looks to be quite wide and, again, very different to most of the circuits we race on. It’s more of a standard time and session schedule, so it will be good to be able to get back on track and get some testing in.”

After securing a well-earned second placed finish in Monaco, Sergio Jimenez will hope to leave Berlin with the points lead. But in reflecting on the race in Monaco and looking forward to racing here in Berlin, the Brazilian said:

“I am really looking forward to racing in Berlin. After the 1-2 finish in Monaco, I´m only one point off being top of the championship table and that´s my main goal for the next weekend: to leave Germany as Jaguar I-PACE eTROPHY´s leader.”

“Berlin will be a brand-new track for me, so it’s important to make the best out of Shakedown and Free Practice in order to have a strong qualifying – that is crucial for a good race result. In the past few races the team have found a nice balance in the car, which has seen some strong performances, so I believe we will be competitive at Tempelhof.”

Ahead of his first outing in the Jaguar I-Pace cars, Dralle said:

“As this is the first time I’m taking part in an all-electric powered racing series, I am very curious to see how it works. I feel nervous but also excited to race alongside the professionals battling to be crowned champion.”

“I’m so pleased to be competing in the vibrant capital of my home country, Berlin, but racing in front a home crowd does add more pressure. I’m looking forward to lights going green and meeting many racing enthusiasts at Tempelhof airfield. See you there!”

Meanwhile in the Pro-Am classification, Saudi Racing driver Bandar Alesayi is 36 points clear of his nearest rival, China racing’s Yaqi Zhang with three races to go.  Alesayi will be desperate for another win here in Berlin, with the possibility of sealing the Pro-Am title even this weekend in Berlin, despite the double-header season finale which will take place at New York City in mid-July.

The next Jaguar I-Pace eTrophy race takes place in Berlin this Saturday with Bryan Sellers the championship leader, albeit only a point clear of Sergio Jimenez. But with everything to play for ahead of the New York City double header, who can reign supreme in Berlin?