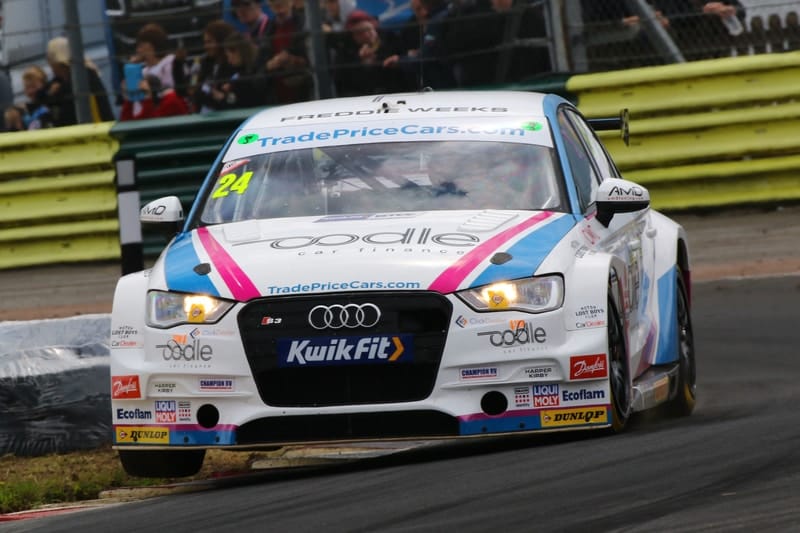 We say provisionally because of an incident at the first corner where Matt Neal managed to work his way past the pole sitter Hill. Pushing the absolute limit to keep in touch with the Honda, Jake made contact with the rear of the Civic tipping Neal into a half spin. With smoke covering the circuit, carnage ensued and Jason Plato was unlucky to damage his sump and drop oil on the run to the hairpin.

Multiple drivers then ran wide due to the slick on track. With this danger seemingly covered and in the mind of the drivers for the remainder of the race, the oil will bite in a big way later on in the race. Now, it’s down to the stewards whether they decide to go for a penalty for Hill or not.

Rory Butcher looked like a shoe-in for second place and possibly victory as he closed a five second gap to the leader. However, with a handful of laps remaining the Honda driver decided to explore the outside of the hairpin and with the oil still on track. He ran wide handing the remaining podium places to Stephen Jelley and Tom Oliphant.

Both Stephen and Tom enjoy their second podium finishes of the 2019 season.

Josh Cook took seventh ahead of Ashley Sutton and Colin Turkington, the three drivers enjoying a race long battle with Sutton pulling off a superb move on the reigning champion at Cascades.

All eyes are now on the stewards office as they decide the fate of Jake Hill. This could mean that Stephen Jelley could potentially score his first BTCC victory since 2009.

Oliphant hoping to challenge for first BTCC win at Silverstone