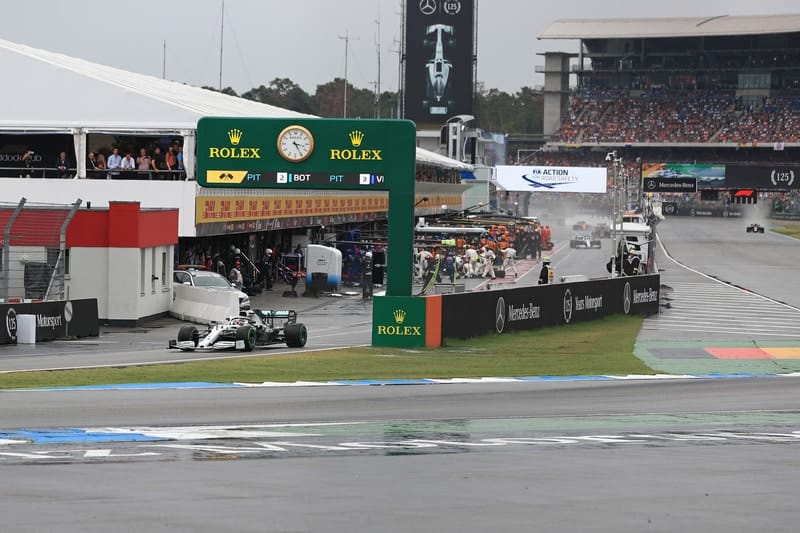 Hamilton was placed under investigation for allegedly driving too slowly behind the Safety Car that was triggered by Charles Leclerc‘s crash on lap 27 of 64 at Hockenheim.

The five-time world champion finished outside the points in eleventh, but was promoted to ninth post-race following 30-second time penalties for both Alfa Romeo Racing cars – demoting Kimi Räikkönen and Antonio Giovinazzi from their provisional seventh and eighth places.

Hamilton then faced losing his points at the end of the investigation, but the matter was ended and his misdemeanour was put down to an “anomaly” of a situation.

The Mercedes AMG Motorsport driver crashed in a similar spot to Leclerc under the Safety Car on slick tyres, and had to crawl back across the run-off and track to reach the pitlane for repairs.

Due to the impromptu nature of the stop, Hamilton was stationary for 50 seconds as his Mercedes team scrambled to find his tyres and a new front wing – having reportedly been ready to receive team-mate Valtteri Bottas when Hamilton entered the pitlane.

Hamilton then kept to the Safety Car delta shown on his steering wheel display, having only crossed the Safety Car line once, while other drivers that had crossed the line twice were able to run at normal speeds to catch the back of the queue.

The difference between the lap times and average speed activated the warning to the stewards, but race director Michael Masi explained that Hamilton’s situation was a new one and will be looked at further in order to avoid a repeat.

“It was an anomaly basically with the way the system is. So there was no further action with that one,” Masi told Motorsport.com

“Effectively, your first two laps under the Safety Car, you have to respect the delta time to effectively catch up.

“The anomaly was everyone else was on their third lap so was able to catch up, but Lewis was on his second lap so was having to effectively respect the delta while everyone else around him was racing to catch the back of the line.

“Speaking to a couple of the sporting directors since, it is a situation that we have not seen before.

“So it is something for us to look at generally.”