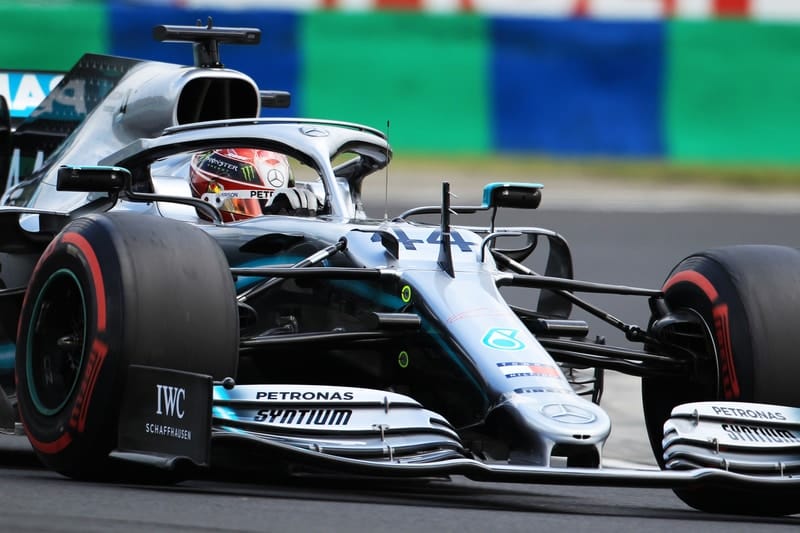 Mercedes AMG Motorsport’s Lewis Hamilton set the fastest time in a frantic Free Practice 3 session at the Hungarian Grand Prix, a session that was delayed in starting.

Ralph Boschung‘s spectacular engine failure in the first FIA Formula 2 race of the weekend on Saturday morning sprayed oil and fluid all over the track from Turn 4 to Turn 5, and needed tending to in between the end of the race and the start of the final practice session of the weekend.

The necessary fixes, including a long trail of cement dust, delayed the start of Saturday morning running by 10 minutes, shortening an important session from one hour to 50 minutes.

An improving track ensured that drivers were still performing qualifying simulations up to the chequered flag, with times falling throughout the session.

Hamilton’s lap time of a 1:16.084, a new track record at the Hungaroring, beat Red Bull Racing‘s Max Verstappen by just 0.013 seconds – with Sebastian Vettel still within a tenth of a second in third for Scuderia Ferrari.

Lando Norris and Carlos Sainz Jr. were the early pacesetters for the McLaren F1 Team as times stayed in the high teens, with drivers approaching Turn 4 with caution.

Both Ferraris were quick to respond with Charles Leclerc heading the session by over half-a-second before Vettel vaulted to the top of the timing screens with a 1:17.435, and improved by a further tenth on his next run.

Hamilton, Valtteri Bottas and Verstappen stayed in the garage for the opening stages of the session and were the last of the frontrunners to emerge.

Hamilton and Bottas assumed the top two spots on their first runs, but Verstappen responded by forcing himself ahead of both of them.

For the whole session, Ferrari was supreme in the more power-dependent first sector, but Mercedes and Red Bull reeled the time back through the more technical final two sectors.

The final 20 minutes of the season saw Verstappen, Hamilton and Vettel all trade fastest times, with Bottas and Leclerc in close company.

Bottas was left frustrated and had to abort one of his fast laps on the exit of Turn 4 after hitting the turbulent air of Sergio Pérez‘s Racing Point F1 Team car and suffering a moment on the dusty outside kerb.

In the final stages of the session, Verstappen and Hamilton made it a battle between the two to head the standings going in to qualifying.

Verstappen’s final lap was a picture of consistency and warranted a new track record, but Hamilton had the final say seconds before the chequered flag with a stunning final sector.

Bottas and Leclerc ended up trailing by 0.271s and 0.308s respectively in fourth and fifth, but showed that they have the potential to fight for pole position later in the afternoon.

Pierre Gasly lagged behind the top five, exactly six-tenths behind Hamilton and over half-a-second behind team-mate Verstappen.

Norris troubled the top five at various stages of the session but had to settle for seventh come the conclusion of the session, despite setting a time just 0.690s away from Hamilton – the final driver inside a second of the Brit’s time.

Kimi Räikkönen and Carlos Sainz Jr. were very evenly matched in eighth and ninth with just 0.001s separating the duo, while Kevin Magnussen edged out his Haas F1 Team team-mate Romain Grosjean to round out the top 10.