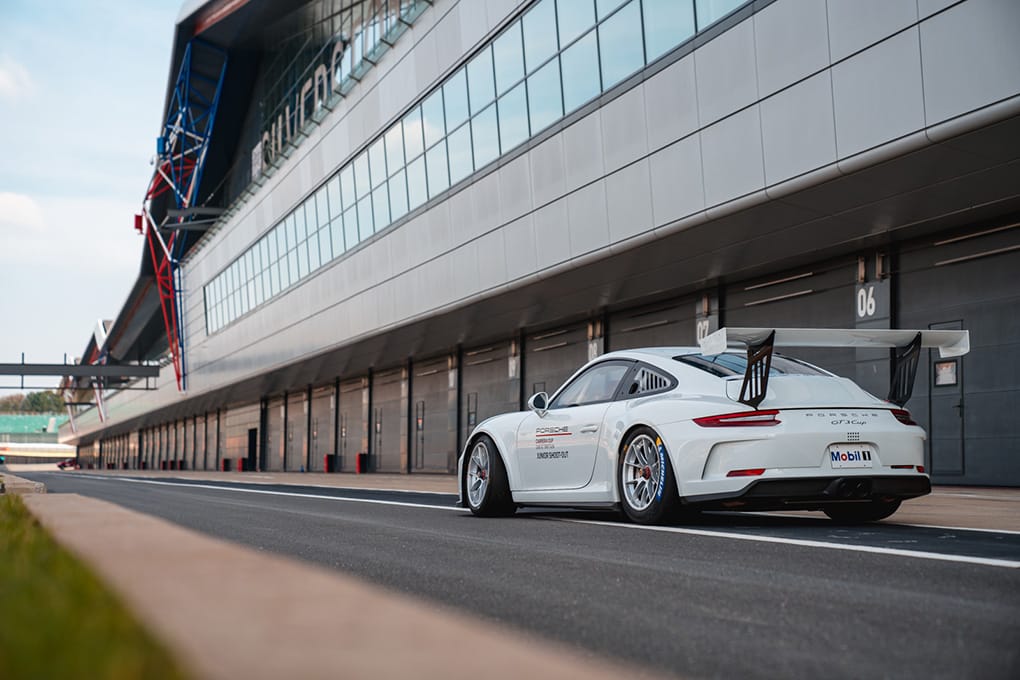 On Saturday (9 November 2019) Ginetta GT4 Supercup Champion Harry King rounded out an impressive year with the announcement at the annual Porsche Night of Motorsport award ceremony that he would be the new Porsche GB Junior for 2020 and 2021.

On 30 October 2019 King faced Luke Browning, Louis Foster, and Lorcan Hanafin as they went head-to-head in a number of assessments both on and off of the Silverstone Circuit.

Talking at the Porsche awards King commented, “It was a long few weeks of waiting to find out how we did and you know it’s tough that we were coming from a race track not knowing the result and to finally get it under our belt to understand to know we are in the Porsche Carrera Cup GB Junior for 2020/21”

While King was the winner of the Junior shootout, he revealed that despite the result it was a fantastic experience to be part of.

“It sounds really cool, its a very nice title but a big thank you to Porsche for the day. Regardless of the result, it was a great experience for all us four drivers, and we are all so privileged to be in a position to compete for such a title.

With the Junior programme secure and the next two years of racing guaranteed in Porsche Carrera Cup GB, King knows that it is just the beginning of the journey and is wanting to make the most of the opportunity and not rest on his laurels.

“To finally get the label to my name is really awesome, but I’m more than motivated to work as hard as I can throughout the winter and hit the ground running in the new Championship, which I’m excited to learn and to discover in these coming years and looking forward to seeing what the future holds.”

Throughout the day at Silverstone, the four Juniors-in-waiting were put to the test on the track, driving the Porsche 911 GT3 Cup car up against the clock. While pace is an important part of the selection process, the quartet was also judged on fitness tests, engineer feedback and how they handled the media.

“We were tested on not just on our driving capabilities, but also our fitness and media, so it was a day filled with not just driving, which we’d all love to do, but in the media with Louise Goodman and with Lloyd Bell.

“We were getting all sorts of questions thrown at us to see how we coped with it, as the best driver is the person which Porsche feel can fit into their family, so I’m delighted to be the chosen one, but it was a very intense day at Silverstone.

“I don’t think I’ve ever had a day as intense as that, but it made up for it with all the relief and the joy to find out the result and that we will be on the Porsche grid for two consecutive years coming.”

“You can’t ask for much better, being eighteen-years-old and knowing that Porsche have put their faith in you and put their trust in your capabilities and how you handle yourself off track it’s a lot of responsibility, but I’m sure they’ve chosen me for the right reasons and I can’t wait to prove them right.”

In a current climate where some drivers are struggling to find a budget to race, the guarantee of two seasons of racing comes at an important time for King.

“I’m at the age now where you can begin to start to make a career and begin to find your footsteps into becoming a Pro Driver in your twenties. So being eighteen-years-old I’m still very young and having the support from Porsche, not only financially, but also the support off-track.

“Along with learning and discovering the cars, and having that insight from not only from the team but people who literally built the cars from the ground up is better than what you can ask for really so I can’t wait to get the season underway.“

Outside of racing King is currently at Loughborough College, taking part in the Motorsport UK Programme, which helps him achieve a good balance between racing and studying.

“We are very lucky because we don’t have to go into college as often as you would with a full-time course, we only have to go in 6 days a month and do the rest of the work where we can fit it in around our racing. This can be a struggle sometimes, but of course, I need to get the educational studies under my belt.

“When I finish that later this year we can follow and pursue my dreams which sit with driving race cars and I know I still have those qualifications to fall back on if anything was to happen. So yeah in a very good position and looking forward to the next coming years.”

With the 2019 season now a distant memory, King has the off-season to prepare for the new year. His first official duty will be at the Autosport International Show in Birmingham in January before testing and media day in March.

“It’s going to be a long winter, but I’m sure a lot of learning to do with the new car, and I need to hit the ground running and impress on my debut.

“We’ve got plenty more races to build up to it and in my second year, I’ve got big boots to fill with the likes of Charlie Eastwood and Dan Harper who went on to win the Carrera Cup GB Championship in their second year being a Porsche Junior.

“If I can achieve that I’ll definitely prove Porsche correct in their decision, so I’ve still got a year of learning, but I’ll still be trying as hard as ever to get those points and those wins.”

By Ross Wylie
3 Mins read
Ross Wylie’s season is underway in the GT Cup as he defends his title, along with an opportunity to drive for Valluga in the British GT championship and a visit to the Carrera Cup GB.
Porsche Carrera Cup GB