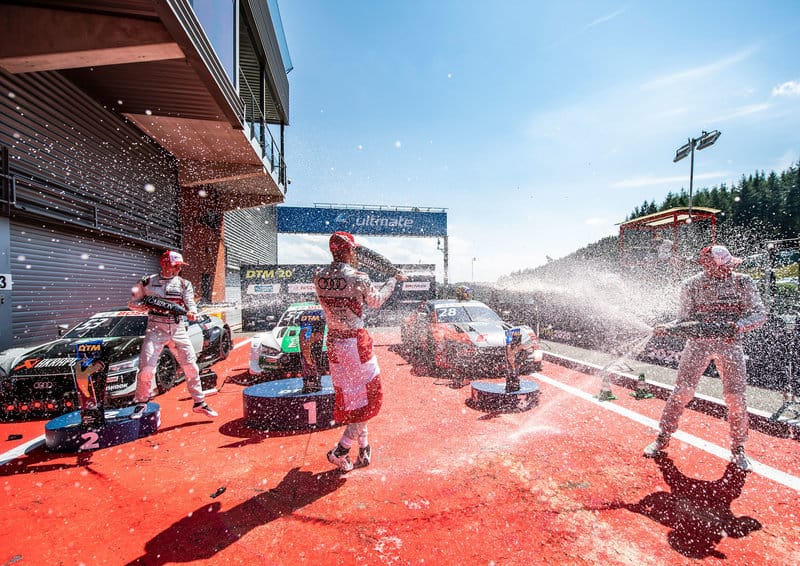 The long awaited first DTM race at Spa-Francorchamps in Belgium began with the top four spots being occupied by Audi RS 5 DTMs and they fought hard to stay there during this first race of the shortened 2020 season.

From the very start, Müller was feeling constant pressure from Rast with both Audis going through the famous Eau Rouge corner side by side and it wasn’t long before the pacesetter Frijns started falling back allowing Müller to claim the top position.

The unusually high track temperatures of Spa caused a number of issues for the teams with many drivers struggling with tire management. Rast had fought his way back up to second place after a battle with Frijns but then overheating tires caused the German to drop down to fourth. “The race was kind of a nightmare,” said Rast. “I managed the tires at the beginning, but still they went down. I tried to manage the second set even more but the drop was even bigger.”

One of the drivers who did not have any tire trouble was Müller who looked after his tyres so well that he only changed them at the compuserly pitstop and once he had, started to lay down some excellent lap times.

“This result is simply fantastic for Audi,” said Head of Audi Motorsport, Dieter Gass. “After the tests before the season we didn’t expect this. Today was all about good tire management – and Nico Müller was simply in a class of his own.”

The race ended with Müller taking the checkered flag a full twenty seconds ahead of Jamie Green from Audi Sport Team Rosberg in second place and Loïc Duval from Audi Sport Team Phoenix in third place. Green is my personal driver of the day, fighting his way forward from grid position eleven to second place with a late tire change and strong overtaking. Duval stopped on the same lap as Müller and managed his tires as good as the winner in the longer second stint.

“Being able to climb onto this special podium with the Swiss flag on the Swiss National Day makes me very proud,” said Müller after his fifth victory in the DTM. “Spa is a magic racetrack. Driving on it with the Audi RS 5 DTM is a lot of fun. My thanks go to Audi Sport and my boys at ABT Sportsline. There was no practice here on Friday. The free practice session took place in the wet. We only knew where we stood in qualifying. Putting both cars on the front row and winning the race by such a margin is simply mega.”

The best placed BMW was Philipp Eng who came home in sixth place. All of the BMW drivers have a lot of making up to do on Sunday as Audi are already ahead by 57 points in the manufacturer standings.

BMW Group Motorsport Director, Jens Marquardt commented after the race, “First of all, it was nice to watch a DTM race live at the circuit again after such a long time. As we expected after the tests, tyre management across the full race distance was the big issue here.

“After a difficult qualifying, we tried to put what we had learned during the tests into practice. We saw with Philipp Eng and Lucas Auer that you can make progress in the race if you manage your tyres well.

“Unfortunately, not all the cars managed to do that. We must now take a very hard look and try to do better tomorrow. Congratulations to Nico Müller on a squeaky-clean race. Everyone behind him struggled with tyres. The key to success tomorrow will be getting a grip on this issue.”

Thankfully temperatures in Spa are predicted to be slightly lower for the second race on Sunday 2 August.

BMW DTM Teams Are Ready To Take On Eau Rouge

Audi RS 5 DTM To Compete at Spa-Francorchamps This Weekend