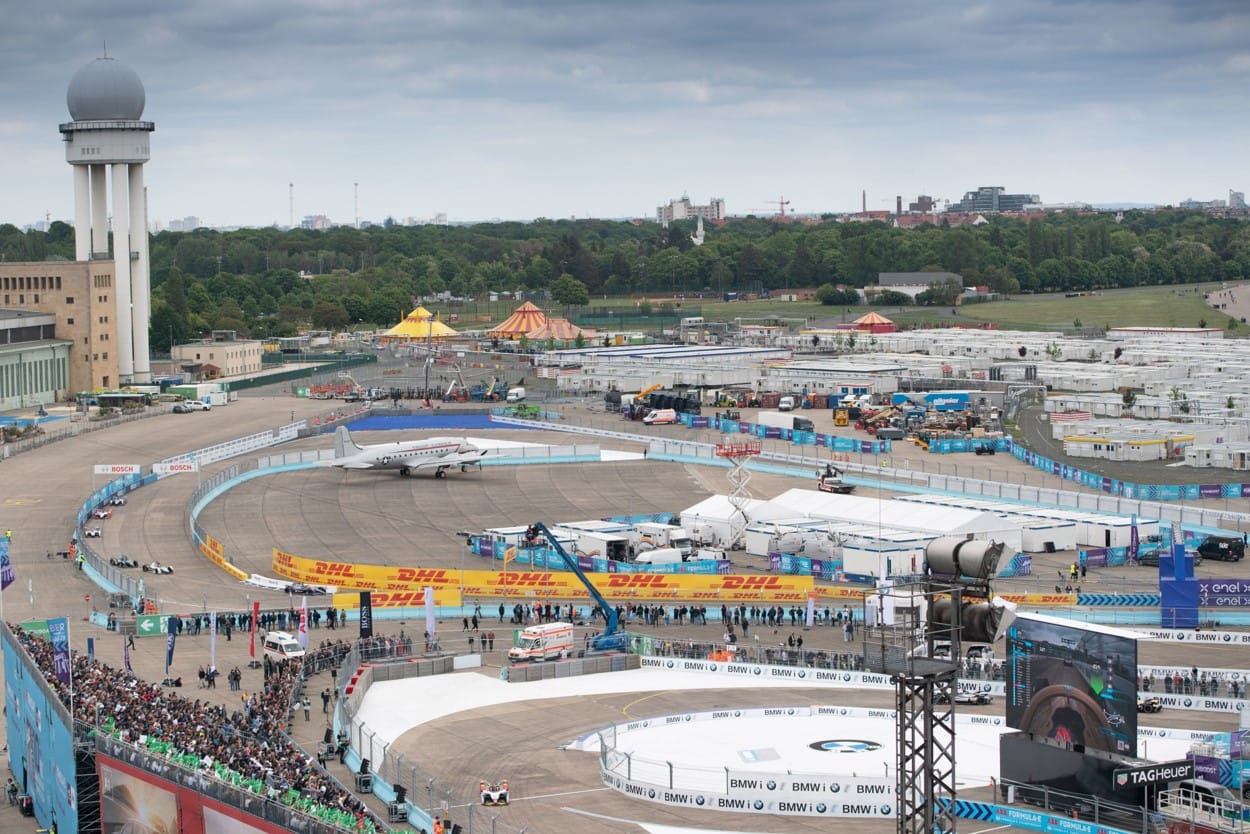 An unprecedented six races in nine days hosted from the Tempelhof Airport Street Circuit in Berlin will bring the 2019/20 FIA Formula E Championship to a close, with the first two rounds taking place on 5-6 August 2020.

With only five races completed before the season was put on hold in March, the six-race showdown promises to provide considerable unpredictability, not least in the drivers’ and teams’ championships. Sitting on 67 points, DS Techeetah’s António Félix da Costa currently heads the points standings, eleven points clear of Panasonic Jaguar Racing ace Mitch Evans. The teams’ championship is even closer with just eight points separating DS Techeetah and BMW i Andretti Motorsport at the top of the table.

Which circuits will be used?

Forced to cancel eight rounds of the championship in light of the coronavirus outbreak, Formula E took the decision to conclude the heavily disrupted 2019/20 season exclusively in Berlin, utilising three circuit variations.

The traditional circuit layout (below) will be used for the first four races, the opening two of which (rounds six and seven) are set to be run on the reverse layout.

The final double-header (rounds ten and eleven) sees the drivers tackle a more complex layout (below), which has not been used previously.

Who will be competing?

The driver changes observed during the postponement of the championship are on the same scale as those usually ocurring between seasons.

Following his controversy in the Race at Home eSports series, Daniel Abt was dropped by Audi Sport Abt Schaeffler Formula E Team, finding refuge at the NIO 333 FE Team due to regular driver Ma Qinghua‘s inability to attend the Berlin finale because of travel restrictions from China. Reigning DTM champion René Rast is to replace Abt at Audi. Ironically, Rast’s only Formula E entry to date came in Berlin, but on the Berlin Street Circuit in the centre of the city which hosted the event in 2016.

German Pascal Wehrlein declared his immediate departure from Mahindra Racing in June and is widely expected to switch to the TAG Heuer Porsche Formula E Team for next season. In his place, Mahindra announced that former DS Virgin Racing and Jaguar driver Alex Lynn will race for them in the final six rounds.

It also recently came to fruition that Brendon Hartley had split with the GEOX Dragon team after just half a season, with the Penske-owned squad announcing former FIA Formula 2 driver Sérgio Sette Câmara as Hartley’s replacement.

Moreover, six-time Formula E starter Tom Blomqvist has been called in by Panasonic Jaguar Racing as their new reserve driver to substitute for James Calado, who is expected to miss at least two of the final rounds due to his commitments for Ferrari in the FIA World Endurance Championship.

After this raft of changes, the driver-lineups going into Berlin are as follows:

What happened in the last race?

Almost five months ago, the Circuit International Automobile Moulay El Hassan hosted the fifth round of the 2019/20 Formula E season in Marrakesh.

Mitch Evans led the championship heading into the race but suffered a mishap in qualifying when Jaguar failed to send him out with enough time to complete a 250kW lap, causing the New Zealander to start from the back of the grid.

Taking full advantage of his rival’s troubles, António Félix da Costa put his DS Techeetah on to pole position, ahead of BMW’s Maximillian Günther and André Lotterer of Porsche.

In the race, da Costa got away cleanly from the front as team-mate and current champion Jean-Éric Vergne charged through the field in the early stages after qualifying a disappointing eleventh. Having passed Lotterer and running third, Mercedes’ Nyck de Vries was handed a drive-through penalty for “overpower during regeneration” and slipped down the order.

With twenty-four minutes (plus a lap) to go, Günther passed da Costa around the outside into turn 1, but the German’s lead did not last long as Techeetah’s tactical use of the Attack Mode power boost allowed da Costa to sail back past and hold on to first.

By the end of the race, the Portuguese driver had pulled out over eleven seconds as Vergne and Günther engaged in a scintillating battle for second place. Vergne slowed in the last few corners as his car ran out of energy, allowing Günther past. Luckily for him, he was able to keep fourth-placed Sebastién Buemi behind before crossing the finish line.

Last season’s race saw Audi’s Lucas di Grassi claim his second victory of the season, from third on the grid. Sebastién Buemi started on pole for Nissan e.dams with HWA Racelab’s Stoffel Vandoorne lining up between the two former series champions in second.

After an even start for the frontrunners, di Grassi made quick work of Vandoorne to move up into second, a lap later passing leader Buemi. The Brazilian was untroubled for the remainder of the race and scored Audi’s second win in a row at the circuit.

Behind di Grassi, the racing was, as it has come to be expected of Formula E, extremely close. Jean-Éric Vergne and António Félix da Costa engaged in a fantastic duel for third place, with the Frenchman eventually coming out on top. Yet, the battle seemingly cost Vergne the chance to pass Buemi, on whom he closed in but was ultimately unable to make a move in the latter stages.

What can we expect this year?

If the first five races of the season are anything to go by, the upcoming six will be far from dull. There have been five different winners in the form of Sam Bird, Alexander Sims, Maximillian Günther, Mitch Evans and António Félix da Costa, who collectively represent four differing teams. No former series champion has taken a win thus far.

The points standings are incredibly tight. Following the aforementioned da Costa (67 points) and Evans (56 points), BMW’s Alexander Sims is just ten points back on 46 in third, with fourth-placed team-mate Günther a further two away on 44. Just thirteen points then separate Lucas di Grassi in fifth (38) and André Lotterer in twelfth (25). With a maximum of 180 points on offer across the nine days, consistently good results for any driver could see them propelled into championship contention.

This is replicated in the teams’ standings. All but NIO and Dragon have shown race-winning potential this season; solid results for a squad’s two drivers could have huge consequences for the teams’ championship. Behind DS Techeetah (98 points) and BMW i Andretti Motorsport (90 points), third-placed Panasonic Jaguar Racing (66 points) sit just nine points ahead of Nissan e.dams (57 points) in fourth, with just a further solitary point back to Mercedes-Benz EQ Formula E Team (56 points) in fifth. Both championships could feasibly be flipped on their heads by the time the chequered flag falls for the final time in Berlin.

Given the historic success of Audi Sport Abt Schaeffler around this circuit, 2016/17 champion Lucas di Grassi will be one to watch; something about the track, whether it be the layout or surface, seems to suit Audi’s car setup each year. However, the reverse layout for rounds six and seven and the altered circuit for the final double-header may play into the hands of other teams.

Expect championship leaders da Costa and Evans to again demonstrate the pace they showed in the earlier rounds, in addition to the BMWs of Günther and Sims. Mercedes’ Stoffel Vandoorne and Nyck de Vries as well as Sam Bird and Robin Frijns of Envision Virgin Racing have also showed flashes of speed during the season, but have been as yet unable to string together consistently good results. Past champions Jean-Éric Vergne and Sebastién Buemi should, as always, never be discounted.

The final six-race ‘showdown’ thus promises to provide more than a week of unpredictability, close racing and drama culminating in the crowning of a champion. You can keep up to date with all the action right here at The Checkered Flag.

When can I watch it?