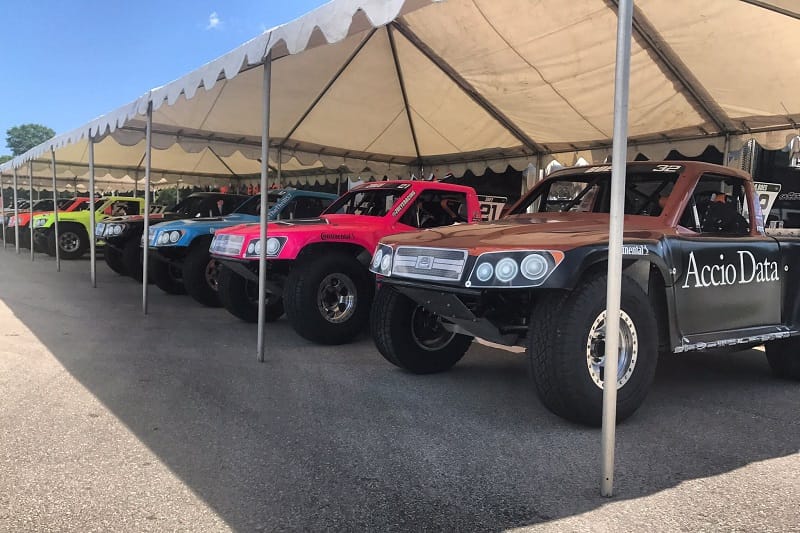 Edenholm, who will drive the #21, is an open-wheel driver who tested a truck on Sunday night; she will be the second female driver in series history and the first American to use #21 since Rob MacCachren during the inaugural SST season in 2013 (Australia’s Matt Nolan raced with the number in 2016, 2018, and 2019).

In the #32 is Boes, a sports car racer who has competed in the Sports Car Club of America and Trans-Am Series. His company Accios Data will serve as his sponsor.

Smith currently races in the NASCAR Gander RV & Outdoors Truck Series for GMS Racing, where he sits fourth in points as a rookie. His GMS team-mate Sheldon Creed will also race at Road America; Creed, who is eighth in the Truck standings, is the winningest driver in SST history. While Creed retains his Truck Series #2 for SST, Smith (who pilots the #21 NASCAR Truck) is using the #66. The two will compete in the Truck race at Michigan International Speedway on Friday before heading to Wisconsin.

The son of series founder Robby Gordon, Max Gordon is a 12-year-old off-road racer with experience in the Best in the Desert and Mint 400. In 2017, he became the youngest Baja 1000 competitor at just nine years of age. “Mad” Max will pilot the #77 with sponsorship from Menards and his father’s SPEED Energy and SPEED RC Cars brands.

Noland is a late entry, joining the field after meeting with Robby Gordon on Thursday evening. In addition to SST, he will run the Trans-Am TA2 event prior to SST Race #2. The 16-year-old super late model racer joined NASCAR Truck Series team Niece Motorsports for a part-time schedule in 2020, but has yet to make a start as the schedule was impacted by COVID-19.

“We showed up to Road America to race Trans-Am, and ended up in a Stadium Super Truck which is pretty awesome,” Noland said in a release. “It’s an honor to be racing with Robby Gordon. I can’t wait to get into the truck Saturday.

“The main focus is obviously the Trans-Am car. But I’ve always wanted to drive one of these trucks since I was a kid on a four wheeler in the back woods of Groveland. So I’m looking forward to having a little fun.”

Gordon (#7), Bill Hynes (#57), and Matt Brabham (#83) are unsurprising entries as full-time drivers. Arie Luyendyk Jr. and John Holtger will make their returns in the #25 and #44, respectively. Luyendyk, a two-time SST race winner, has never driven a stadium truck at Road America, while Holtger made his début there in 2019.

Two practice sessions will take place on Thursday and Friday, followed by qualifying on the latter day. On Saturday will be two races, one before the NASCAR Xfinity Series‘ Henry 180 and another after the Trans-Am event in the afternoon. It is SST’s first action since the Adelaide 500 in February and the first American weekend of the season.

UPDATE: Article has been updated to include Noland’s announcement.