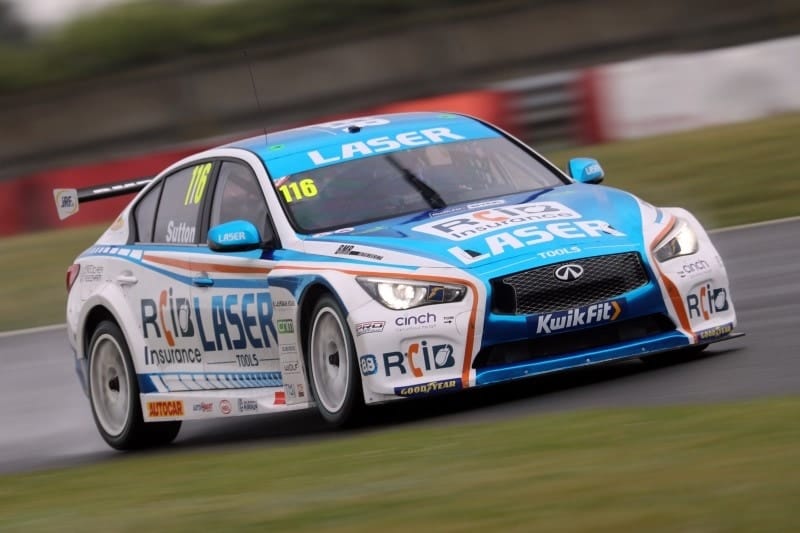 Sutton who had been quick all day finally got the victory his pace deserved. Photo credit: BTCC.net media

Ash Sutton charged through the field from eighth on the grid to take his first victory of the season. This meant three different victors from the opening three races of the 2020 Kwik Fit British Touring Car Championship at Donington Park.

Sutton scythed his way through the field to take a fairly routine victory whilst battles raged on behind. Chris Smiley claimed second place, the first ever podium for Excelr8 Motorsport and the perfect start for the Hyundai i30 on its championship debut. He just fended off Josh Cook who ended what had been a difficult day up to that point with a podium.

As the lights went out Smiley made a poor start and Ollie Jackson swept into the lead from second on the grid. Stephen Jelley made the best start from fourth but Smiley squeezed him onto the grass which allowed Cook up into third position.

The safety car was deployed at the end of the first lap after Jack Butel’s Mercedes was punted into the gravel by Ollie Brown.

It didn’t take long to move Butel’s car and the race resumed on lap three with Jackson making a good restart ahead of Smiley and Cook. Sutton was already making progress behind though as he dispatched Dan Cammish and Jelley on the same lap to move up to fifth.

On lap seven Cammish also found a way past Jelley at the chicane and the Team Parker driver was tagged into a spin by a car behind which dropped him to the rear of the field.

At the front a five car train had developed for the lead with Jackson closely followed by Smiley, Cook, Adam Morgan and Sutton. Sensing there were faster cars approaching, Smiley dived past Jackson into the lead at the Old Hairpin. Cook also took advantage of Jackson’s lack of momentum and took second off him. Things got worse for the Motorbase driver later that lap as he was passed by two cars at Coppice. Amazingly Sutton, Morgan and Jackson ran three abreast into the corner with Sutton passing both cars in one move.

By lap nine, Sutton was up to second as better traction out of Coppice put him on the inside of Cook into the chicane. And a lap later he pulled an identical move on Smiley to relieve the Hyundai driver of the lead. It was a lead Sutton would never relinquish as he broke away for the first win for the Infiniti Q50.

At the flag, Sutton had extended his lead to over two seconds from Smiley who was three tenths clear of Cook in a tightly fought contest between the two former team-mates.

Morgan was fourth ahead of early race leader Jackson who had to settle for fifth. Tom Ingram got the better of Dan Cammish late on to finish sixth, with the second Honda of Matt Neal one place behind his team-mate in eighth. The two BMWs, subdued with weight and midfield grid slots, rounded out the top ten with Oliphant ahead of Turkington.

After three rounds defending champion Turkington heads the standings by six points from Dan Cammish with Ash Sutton and Rory Butcher tied for third, a further three points back.

The championship heads to the Brands Hatch GP circuit in Kent next weekend for rounds four, five and six.