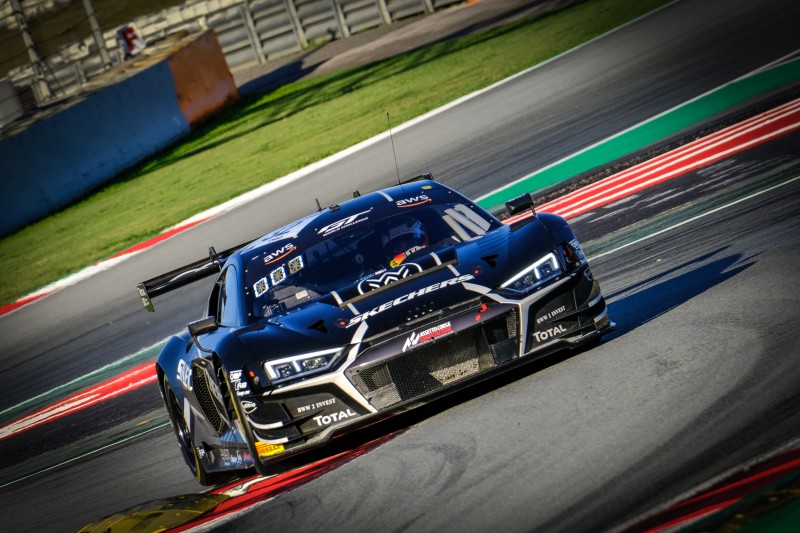 Dries Vanthoor and Charles Weerts come away from the finale of the GT World Challenge Sprint Cup with the title after a dramatic last day which saw the #66 Attempto Racing Audi of Nicholas Scholl and Frederic Vervisch win the first race and the #88 AKKA ASP of Timur Boguslavskiy and Rafaelle Marciello take the honours in the second race of the day.

The title deciding Sunday got underway at the Circuit de Barcelona-Catalunya with two back to back qualifying sessions to decide the grids for race two and three. Just like yesterday it was an Emil Frey Racing car continuing their blistering late season form by grabbing pole. Albert Costa lapped the Spanish circuit 0.062 seconds faster than his nearest challenger of Rafaelle Marciello.

The top two were followed by the two Attempto Racing Audis driven Frederic Vervisch and Mattia Drudi with the #4 HRT Mercedes of Maro Engel taking fifth. The #32 Belgian Audi Club Team WRT of Dries Vanthoor would start behind their teammates in sixth. The Silver Cup and Pro-Am pole-sitters would come next with Oscar Tunjo ultimately qualifying his #2 Toksport Mercedes-AMG eighth overall, one spot head of Eddie Cheever III driving his #93 Sky Tempesta Racing Ferrari.

There wasn’t much time to rest however as the second qualifying session of the day then got underway ten minutes later. This time it was a Marciello masterclass. The Italian set the best time of 1:43.296s which ended up being 0.675s clear of his closest challenger, and also earned a bonus point that could be crucial to Timur Boguslavskiy’s title push. Kelvin Van der Linde took second in the #31 WRT Audi, followed by Vanthoor in the sister car. Costa was fourth, meaning that all but one of the championship hopefuls at the time would start the season-deciding race from the first two rows.

The first race of the day started much like the previous day’s race for Costa with a good start where along with Giacomo Altoè, they hung on to the lead for most of the duration of the hour long contest. Engel had moved into second with a great start from fifth on the grid, but was then required to hand one place back after cutting a corner. This promoted Vervisch to second in the #66 Attempto Racing Audi. The Belgian driver handed over to Nicholas Schöll, who delivered an excellent stint to secure second spot.

Luca Stolz completed the podium after being handed the car by Engel at the pit stops. The German duo closed on the championship lead after finishing one spot ahead of the #32 Team WRT car of Vanthoor and Charles Weerts. Boguslavskiy was fifth in the #88 AKKA ASP machine. Out of the Silver Cup cars, it was AKKA ASP that took victory with Jim Pla and Benjamin Hites getting their first win of 2020. They were followed by the #2 Toksport WRT Mercedes-AMG and the #14 Emil Frey Racing Lamborghini. Despite finishing fourth in the race, it was enough for the #26 Sainteloc Racing Audi driven by Steven Palette and Simon Gachet to clinch their class title with a race to spare.

Pro-Am title was also decided in favour of Chris Frogatt and Eddie Cheever III. The pair produced a cracking drive at the wheel of their Sky Tempesta Ferrari. They came back from an opening-lap collision to seal victory on the final lap of the race when Chris Froggatt made the winning move on Valentin Pierburg’s #20 SPS Mercedes-AMG. The #52 AF Corse Ferrari completed the class podium.

The drama didn’t stop with the end of the race however. The #4 HRT Mercedes and winning #163 Emil Frey squad were both penalised with pit infringements. The penalty came in the form of a thirty second penalty for both crews. The consequence of this is that they both drop out of the points places and thus title contention going into the final race. This gives the #66 Attempto Audi the win for race two.

The final race leaves Vanthoor and Weerts still leading the championship with their nearest rival, Boguslavskiy, just 8.5 points back.

The final deciding race got underway with Marciello at the wheel of the #88 AKKA ASP car retaining the lead after the first turn with the title chasing Audi moving up to second place in the hands of Vanthoor. Further back however there was chaos as a tangle between the #2 Toksport Mercedes and #4 HRT machine meant that the Pro-Am title winning Ferrari was put into the wall with a safety car immediately following.

With the safety car with drawn it was a dual between Vanthoor and Marciello at the front with the AKKA ASP car gradually pulling away as Marciello does everything he can to help his teammate challenge the #32 Audi drivers. The #163 Lamborghini was the first of the top runners to pit trying to attempt an undercut on the #31 car driven by Van der Linde. Unfortunately Altoè couldn’t make it work as Van der Linde handed over to Ryuchiro Tomita and came out ahead of the Italian.

With twenty six minutes to go, Vanthoor handed the car over to Weerts and looked in control of their fate as Marciello pitted a lap later with Boguslavskiy rejoining one place ahead of Weerts in the net lead. With fifteen minutes to go the #31 Audi driven by Tomita was receiving an immense amount of pressure from the pair of Emil Frey Lamborghinis with the Silver Cup #14 leading the #163 car. Tomita was able to soak it up however resisting then for several laps but with seven minutes to go Ricardo Feller made a cracking move around the outside at Turn eight.

Weerts was slowly making in roads to the leading Mercedes but failed to make a serious challenge to the lead of the race. At the flag it was Boguslavskiy taking the win but alas it was not enough as the #32 of Charles Weerts and Dries Vanthoor taking second place and the overall Sprint Cup Championship for the WRT squad which has been well deserved after showing strong pace all season long. In Silver Cup it was the #14 Emil Frey car driven by Grenier and Feller, who really starred this weekend, taking the win from the Silver Cup champions of Steven Palette and Simon Gachet. In Pro-Am it was a lonely but dominant win for the #52 AF Corse car of Andrea Bertolini and Louis Machiels.

With the Sprint Cup titles all wrapped up, attention turns to the Overall and Endurance titles with the next race coming up on 22-25 October…The Total Spa 24 Hours. Even though the race has been reverted back to a 24 hour race rather than the planned 25, the teams will all be looking to conquer the Belgian track before we head to the finale at Circuit Paul Ricard for the last race in the GT World Challenge Europe calendar.

By Nick Golding
3 Mins read
Lotus have unveiled their brand-new Emira GT4 race car at the legendary Hethel test track, in what is a new era of GT racing for the famous manufacturer.
24 Hours of Le MansBritish GTFIA WECGT World ChallengeIMSA

Ferrari give first glimpse of GT future with 296 GT3

By Vince Pettit
1 Mins read
New Ferrari 296 GT3 is already being built and is expected to break cover in the coming months ahead of its 2023 race debut.
Asian Le Mans SeriesEndurance RacingSportscars

By Josh Disborough
1 Mins read
Last month saw the Asian Le Mans Series crown its champions after a back to back four round fight for the trophy.