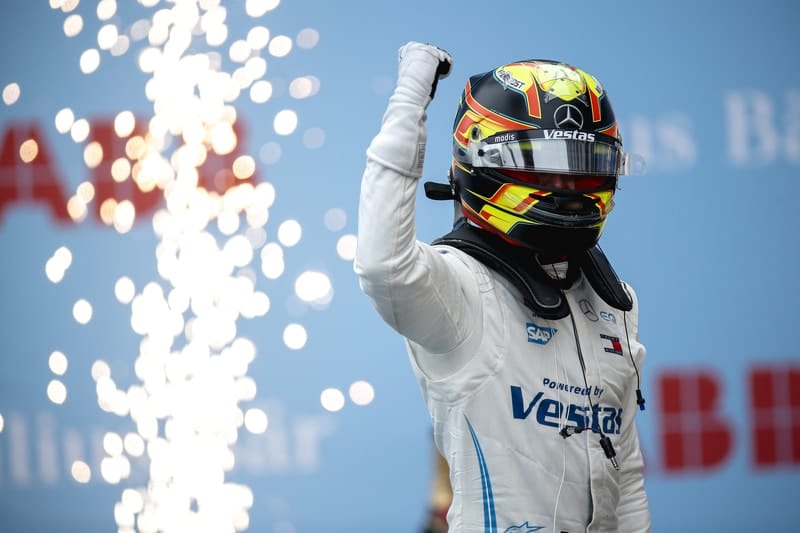 Vandoorne started third after qualifying, and managed to keep himself clear of the incidents in front of him all the way to his victory. He took his first Attack Mode fifteen minutes into the race, and led the field from there on out.

Polesitter Nick Cassidy (Envision Virgin Racing) was an unfortunate victim of the circuit today: he locked his brakes and spun 180 degrees on the first lap, then got hit by Oliver Rowland (Nissan E.DAMS) a few minutes later, which caused a puncture and lead to his ultimate retirement from the race. Rowland sustained a ten-second penalty for the collision.

Pascal Wehrlein, who finished third, moved places a lot during this race: initially starting third, he found himself second after Cassidy’s first lap spin. A smart strategy call from the Mercedes-Benz EQ Team behind him caused him to be second when the first Full Course Yellow flag was waved, and Sims passed him on the restart. He spent the rest of the race trying to pass Nato on track, to no avail.

Sims showed for the first time the kind of pace the Mahindra Racing team had in race conditions, and although he was unable to keep up with Vandoorne prior to the safety car, he was able to keep his rivals behind him and score only the third Formula E podium of his career.

Nato looked as though he had secured his first Formula E podium, but the joy in the Venturi pit was shortlived as an investigation immediately after the race found that the Frenchman had used more than the allowed energy during the race, and it meant he was disqualified from the results.

Reigning Formula E Champion António Félix Da Costa (DS Techeetah) was one of the stars of this race, as he started in fiteenth and ended up in seventh, earning himself six points for the Driver’s Championship. He fought through the field to secure his place in the top ten.

There was an incident in Turn Four between current championship leader Sam Bird (Jaguar Racing), Mercedes-Benz EQ driver Nyck De Vries and Nissan’s Oliver Rowland at the end of the race. De Vries and Sam Bird both had to retire from the race, as their front left wheel suspensions were broken. De Vries was trying to pass Bird on the inside, for an advantage on the next corner, but he could not brake in time to make the corner. His car impacted Bird’s and Rowland was caught up in the incident as well. Rowland was the only one who managed to finish the lap and therefore complete the race distance for his team, although the earlier penalty cost him the chance of points.

The Audi Sport ABT Schaeffler team was the only one with a double retirement from the race. Rene Rast tapped the wall at turn nineteen, broke his right rear wheel suspension, locked his brakes, and hit the diffuser on the wall of Turn One, ending his race. Lucas Di Grassi made an aggressive late defensive move about twenty minutes into the race, losing control of his car near the bump between turns six and seven, causing the end of his participation in the event.

Edoardo Mortara drove a solid race for his team ROKIT Venturi Racing, giving the team points in the championship. Maximilian Günther (BMW i Andretti Motorsport), who missed his first attack mode activation, was quite forceful during the race. He forced Nato into the wall at Turn Seven about twenty minutes into the race (luckily without causing damage to either car), with his attack mode on.

Mitch Evans (Jaguar Racing), Saturday’s third-place finisher, drove a clean race with no incidents, giving his team eight points and extending Jaguar Racing’s advantage at the top of the Team’s Championship standings. The Season two Formula E Champion Sebastien Buemi had some issues, he was passed by several drivers during the opening stages of the race and kept his head down in the second part, allowing him to win four points for his team. Tom Blomqvist and Nico Müller were the last two points-scorers today, showing progression for the NIO 333 Formula E Team and the Dragon-Penske Autosport teams.

Robin Frijns, race winner Nick Cassidy’s team-mate, got a ten-second penalty at the start of the race for not respecting the Safety Car procedure: he had to maintain a maximum of a ten-car length distance between him and the driver in front of him and he did not manage to do so. Along with Alex Lynn (Mahindra Racing) and Cassidy, Frijns got a thirty-second penalty post-race for not having used all three Attack Modes in this event.

The next race will take place at the Circuito Ricardo Tormo in Valencia, Spain on 24/25 April 2021. It will be Formula E’s first visit to a permanent race track.

Edoardo Mortara: “This weekend’s E-Prix is very special to us”

By Anna Schuurmans
1 Mins read
The ROKiT Venturi Racing team will be competing in their home race this weekend. With a good qualifying session, what can we expect from them?
Formula E

By Anna Schuurmans
1 Mins read
The Mercedes EQ Formula E team scored a double podium in Valencia Round five, but had a poor result in Round six, Can they bounce back in Monaco?
Formula E

By Anna Schuurmans
1 Mins read
“Don’t judge Formula E on where it started, judge it on its rate of progression” – Envision Virgin Racing. What can we expect from this team this weekend?