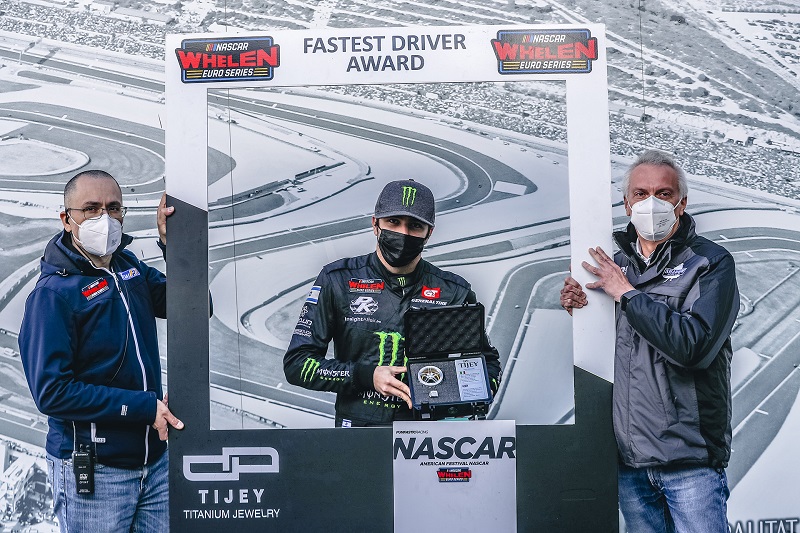 UPDATE (14 MAY): Upon discussion with team owners, EuroNASCAR has reversed course and will not award qualifying points handicaps. Instead, the qualifying format will revert to the 2020 format: no points will be given for qualifying, and the handicap will not take place for podium finishers’ starting spots in Race #2 which will simply be set by fastest lap. The original article has been preserved for reference below.

The 2021 NASCAR Whelen Euro Series season will kick off at Circuit Ricardo Tormo in Valencia, Spain, this weekend, and EuroNASCAR has introduced modifications to the points and starting lineup formats. Some of the changes return from previous years while others are new, particularly the introduction of a “success handicap” that drops where a driver starts Race #2 depending on how they finished the first.

After Friday practice (two thirty-minute sessions for EuroNASCAR PRO and EuroNASCAR 2, with a third if the Club Challenge is taking part), two qualifying runs will take place. Like usual, the starting grid for Race #1 on Saturdays will be set based on qualifying results. The three fastest drivers receive up to three points.

As in previous years, the lineup for Race #2 on Sundays will be based on the fastest lap times from the first. However, a slight tweak has been added: the three podium finishers in Race #1 will be relegated positions, with the winner dropping three spots, runner-up falling two, and third going down by one. For example, if a driver wins the first race and sets the fastest lap, they will start the second in fourth.

Ballasts and handicaps are not uncommon in other sports and racing disciplines to increase competition. When the NASCAR Cup Series has doubleheaders like at Pocono (and various other races in 2020 due to COVID-19), the top twenty from the first race is inverted for the second.

Also like in the past, a driver’s two worst finishing results are dropped from their points tally. The final race weekend, which is currently set for 9/10 October at Circuit Zolder but is pending the addition of Autodromo di Vallelunga (which had been moved from the spring to an unconfirmed fall date because of the pandemic), will feature double points.

EuroNASCAR also announced slick tyre allocations at Valencia, Autodrom Most, Hockenheimring, and Zolder where each driver receives four new Hoosier Racing Tires. At Vallelunga, Brands Hatch, and Automotodrom Grobnik, drivers will get just two fresh tyres. In total, twenty-two tyres are available for each competitor that they will have to balance with older ones throughout the season.

The season kicks off on 15/16 May. Thirty cars are entered across the two main classes.

By Justin Nguyen
2 Mins read
FEED Racing has launched the FEED EuroNASCAR Challenge, a school led by Jacques Villeneuve and Patrick Lemarié at Magny-Cours, with the winner getting a full-time Whelen Euro Series ride in 2022.