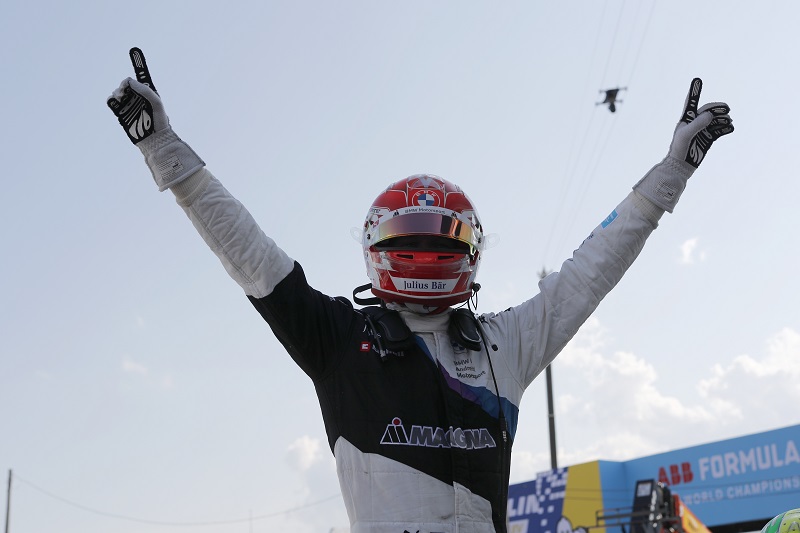 Maximilian Günther took full advantage of a battle for the lead between Nick Cassidy and Jean-Éric Vergne to steal victory in the opening New York City E-Prix on Saturday.

Günther was running third when Vergne attempted an overtake on long-time leader Cassidy at the hairpin, and with contact made between the two, the BMW i Andretti Motorsport driver was able to pinch the lead.

Cassidy had led from the start having taken his second career ABB FIA Formula E World Championship pole position earlier in the day, with the Envision Virgin Racing driver seemingly in control of the race.

He was challenged in the first corner by a fast-starting Alex Lynn, but the Mahindra Racing driver ran too wide and instead of making up ground from third on the grid, he actually lost two positions and slipped to fifth.

Cassidy was shadowed throughout by DS Techeetah’s Vergne, with the two-time Formula E champion seemingly biding his time and conserving his energy before making a move.  Meanwhile, Günther had made one place up at the start thanks to Lynn’s mistake, and he made a superb pass on Nissan e.dams’ Sébastien Buemi to run third.

Lynn’s race then took another negative turn, with the Briton being hit from behind by Tag Heuer Porsche Formula E Team’s Pascal Wehrlein at the hairpin as the German locked up behind him.  Lynn dropped a place behind Nissan’s Oliver Rowland, but Wehrlein’s afternoon was over with a damaged suspension.

There was a brief full course yellow not long after as Mitch Evans ground to a halt at turn one, with the Jaguar Racing driver losing power.  His car was swiftly removed from the track and racing resumed without any power reduction being applied by the officials.

Cassidy resumed in the lead, but Vergne continued to stalk him, and with eight laps remaining he made his move at the hairpin.  Unfortunately, the Techeetah driver was unable to avoid his rival and both slid out wide, which gave Günther the chance to go inside both of them to take the lead.

Vergne was able to get ahead of Cassidy to run second, but the Frenchman did not have the pace to keep tabs with Günther, with the German using his energy to great use to pull away for his first victory of what has been a difficult campaign up to now for the Andretti driver.

Cassidy was also forced to concede third to Audi Sport ABT Schaeffler’s Lucas di Grassi, with the Brazilian ending the day by advancing four positions from his grid slot to take the final position on the podium.

A strong drive from Virgin’s Robin Frijns gave the Dutchman fifth and the share of the championship lead, as pre-race leader Edoardo Mortara could not better fourteenth.  The ROKiT Venturi Racing driver had started on the back row of the grid after he was unable to use his full 250kw of power during his Qualifying run earlier in the day, and ultimately, he had a quiet race and missed out on points.

Despite running inside the top three early on, Buemi could only finish sixth, just ahead of team-mate Rowland, while André Lotterer took eighth for Porsche for only his second points finish of the 2020-21 season.

Jaguar Racing’s Sam Bird took ninth, while René Rast took the final point in tenth for Audi despite having started twenty-second on the grid after being delayed by the slow Mortara in Qualifying.

After an encouraging start, Lynn ended a disappointing eleventh, while his Mahindra team-mate Alexander Sims was one of six retirees alongside Wehrlein, Evans, Oliver Turvey, Stoffel Vandoorne and Jake Dennis.

Reigning champion António Félix da Costa could only finish twelfth for Techeetah, just ahead of Mercedes-EQ Formula E Team’s Nyck de Vries, who drove most of the race with a damaged car after making contact with another driver at the hairpin on lap one.

Mortara and Frijns are tied at the top of the championship standings on seventy-two points, with Vergne now only four points behind in third. With twenty-five points available for a win, the top fifteen are all within a victory of the lead, and with five races still to go, it is all to play for.

Günther’s win means there have been nine different winners in the opening ten races – only de Vries has taken two wins this year – while nineteen different drivers have stood on the podium.

By Paul Hensby
2 Mins read
Jaguar Racing have committed themselves to remain in FIA Formula E into the next generation of cars starting from the 2022-23 season.
Formula E

Jake Dennis: “I am extremely excited about my home race in London”

By Paul Hensby
2 Mins read
Jake Dennis is aiming for two big results in his home E-Prix this weekend as Formula E hits the streets of London for the first time in five years.
Formula E

Edoardo Mortara: “Scoring points consistently is the most important thing”

By Paul Hensby
2 Mins read
Edoardo Mortara does not want a repeat of his New York weekend where he failed to score points in either E-Prix when Formula E hits the streets of London this weekend.