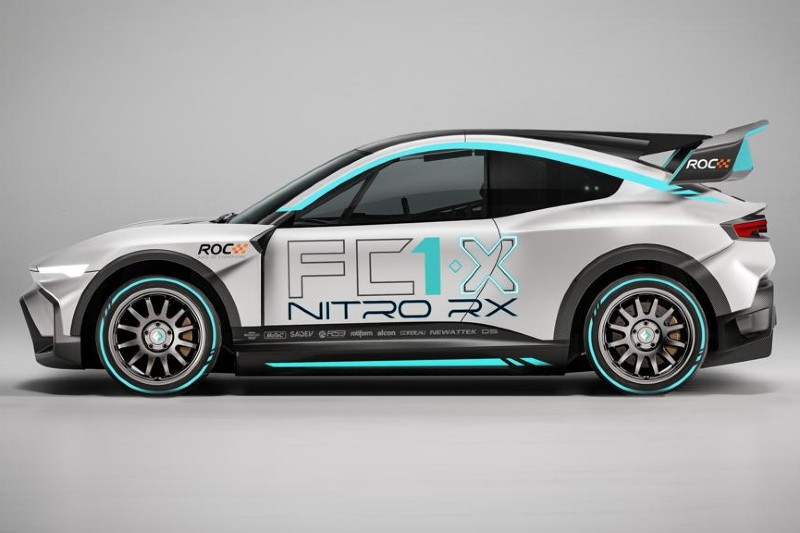 The 2022 Race of Champions will mark not only the first time that the star-studded event is held on a snow/ice surface, but also the first race for the FC1-X. On Monday, a day after Nitro Rallycross wrapped up its Wild Horse Pass race weekend, ROC announced the series’ FC1-X electric car will make its racing début at the event on 4–6 February.

Various rallycross series have experimented with electric vehicles in recent times, perhaps most notably the FIA World Rallycross Championship which intends to switch to a fully electric grid in 2022. In advance, the series has the all-electric FIA RX2e Championship support class. NRX’s FC1-X will also begin competition in 2022 with a sixteen-car grid, though as its own division while the headlining Supercars continue to use internal combustion engines. Dreyer & Reinbold Racing, Good Times Racing, Gronholm RX, Olsbergs MSE, Vermont SportsCar, and XiTE Racing have currently locked in their entries for the FC1-X, as has a to-be-announced organisation.

Unveiled at Wild Horse Pass, the FC1-X was designed by First Corner, a joint venture between QEV Technologies and Olsbergs MSE, with blessings from manufactuers like Ford, Subaru, and Volkswagen. QEV is a Spanish electric mobility manufacturer that is responsible for projects like solar cars and has participated in motorsport like Formula E, Extreme E, the World Rally Championship, and touring cars. Olsbergs MSE is one of the top operations in the rallycross world. Both parties also worked together on the RX2e.

The FC1-X is intended to be the fastest and strongest rallycross car in history, even quicker than its ICE-powered counterparts. It is planned to have over 1,000 horsepower; by comparison, Supercars possess 600 hp.

“Our future goal is to break all kinds of records with this platform,” said Olsbergs MSE head Andreas Eriksson. “We can today do 0–100 km in less than 1.5 seconds. The car will make a mark on history and perhaps change the way we look at motorsport. ROC is the perfect launch pad for the FC1-X.”

ROC, which will be held near the Arctic Circle in northern Sweden, adds the FC1-X as part of shifting towards carbon neutrality and environmentally friendlier options. The RX2e will also be utilised at the event.

“We belong to a region that is at the forefront of the green transition and we also want all our events to be characterized by and take responsibility for environmental and sustainability issues,” commented organiser and Pite Havsbad Group head Tobias Lindfors. “Pite Havsbad, which is the Nordic region’s largest tourist and conference facility, is heated by waste heat at 95 percent. This is something we are very proud of, but of course we continue to work on developing these issues further and electric cars is part of this.”

By Justin Nguyen
2 Mins read
NASCAR’s Kyle Busch will dabble in Nitro Rallycross for the first time when he runs the Wild Horse Pass Motorsports Park weekend on 13/14 November. He will race in the Supercar class against those like Travis Pastrana, Steve Arpin, and Scott Speed who also have NASCAR experience.
Nitro Rallycross

By Kieran Forrest
1 Mins read
The privateer team fought for its first podium of the season as round one came to a conclusion.