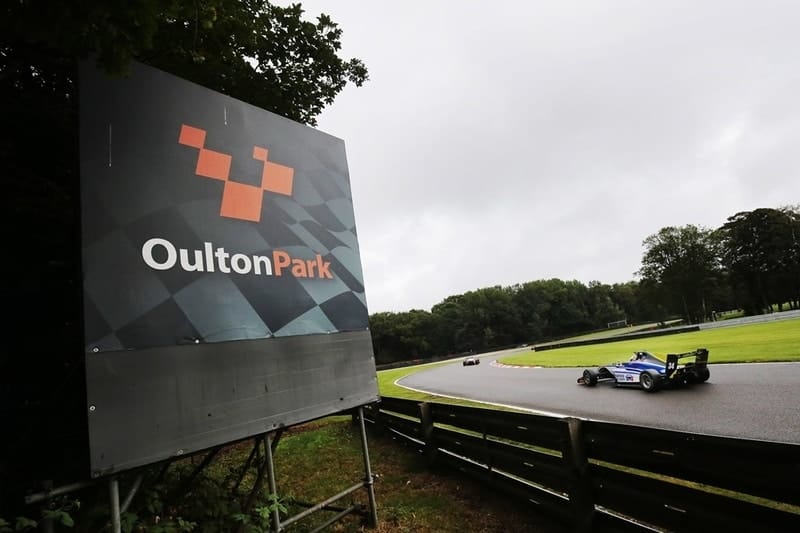 The Checkered Flag takes a look back at last year’s running in Cheshire, and ahead to the curtain-raiser to come.

Oulton Park hosted the penultimate round of the 2021 season, with mixed conditions throughout the weekend making for three characteristically unpredictable races.

O’Sullivan has since moved onto the FIA Formula 3 Championship with Carlin, while Bilinski will compete in Formula Regional European Championship by Alpine this year with Trident.

Browning returns for a full GB3 season with Hitech GP after his 2021 wildcard performance at his home circuit with Fortec Motorsport, having won the 2020 F4 British Championship with the team.

Oulton Park is 2.692 miles long, with 17 undulating corners in the Cheshire countryside making for a thrilling experience the drivers always speak highly of.

Old Hall Corner presents the drivers with a difficult braking zone and a runoff area of grass and astroturf which plenty of drivers found themselves on last year, presenting yet another challenge in the wet.

There’s then a plunge down the Avenue into Cascades, where the circuit forks off to the right for the Foster’s circuit. The GB3 circuit takes the field down the Lakeside Straight into Island Bend, one of the trickiest corners on the calendar.

The Shell Oils Hairpin is unlikely to present an overtaking opportunity, but the Britten’s and Hislop’s chicanes afterwards may be the site of some risky moves throughout the weekend.

Zak O’Sullivan took himself out of the race at Hislop’s in Race 2 last year by trying to overtake Luke Browning around the outside, running out of road and skidding across the wet grass, back across the track and finding the barriers just before Knickerbrook.

Knickerbrook used to be a much faster, much more intimidating corner but it still leads the drivers under the bridge, up Clay Hill and into Druids.

That is likely to be the other most difficult braking zone on the circuit, as drivers pull the car from left to right, ride over the uneven track surface on entry and set the car up on the exit for a lunge into Lodge.

This writer remembers Lodge as the site of Tommy Hill‘s two crashes in as many laps in the final weekend of the 2010 MCE British Superbike Championship, as he outbraked himself on the bump on entry and took out himself and James Ellison.

Andrew Gordon-Colebrooke also came a cropper there in a somewhat similar incident in the Intelligent Money British GT Championship last year, taking out Jack Brown in an ill-judged move down the inside.

What to look out for this weekend

The GB3 Championship welcomes an upgraded, bespoke car for 2022 in the form of the Tatuus MSV-022, with a halo, 25 per cent more downforce, a 20bhp increase to its Mountune-prepared engine and a side-mounted airbox bringing it closer to more traditional Formula 3-spec cars around Europe.

Relatively few drivers on the grid will be able to make a direct comparison between, or comment on the upgrades, as only five of the 21 drivers currently announced competed in the full 2021 season.

Branden Oxley, Tommy Smith, James Hedley, Alex Connor and Luke Browning all competed in at least one round last year, but dipped in and out of the Championship for various reasons.

That degree of upheaval across the grid comes with the territory in junior single-seater racing, but all 21 drivers bring a wide range of experience levels into the season, making for a fascinating opening round at Oulton Park as 2022 gets off the line.

The Checkered Flag will be bringing you reports, news and interviews from every session on Saturday and Easter Monday.

Live timing is provided by TSL Timing from Thursday morning through to Monday afternoon, with official live-streams of all three races on the MSV TV YouTube channel and the GB3 Championship website.

Check out our full season preview to get fully up-to-speed with the line-ups, calendar and more ahead of the 2022 season.

Granfors tops the table and the GB3 talking points after Silverstone

By Michael Callander
5 Mins read
The GB3 Championship saw three first-time winners at Silverstone last weekend, and a new name on top of the standings. We take a look at the key stories after the first quarter of the season.
GB3

By Michael Callander
2 Mins read
Max Esterson delivered his best results since moving up to GB3 with two fourth-place finishes in the first two races at Silverstone. The Checkered Flag caught up with the Red Bull-backed driver after Race 2.